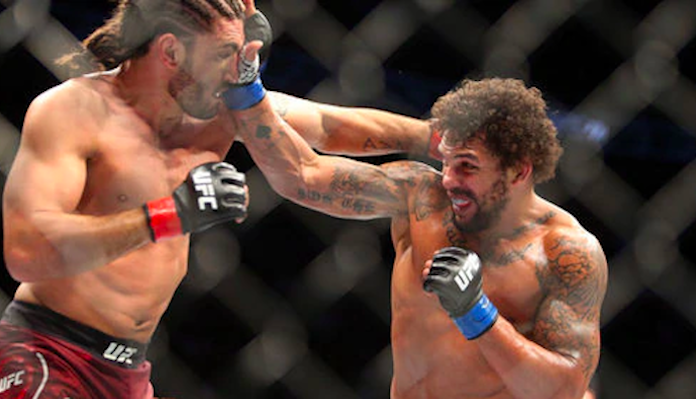 After Elias Theodorou lost to Derek Brunson back at UFC Ottawa, he was released from the promotion. This news came as a surprise as the Canadian went 8-3 inside the Octagon and was an ‘Ultimate Fighter’ winner.

Yet, that was not enough to keep Theodorou around, as his style was not the most entertaining. He was booed in his last two fights, and the UFC had seemingly seen enough. Although many, like Joe Rogan, don’t understand why the Las Vegas-based promotion released Theodorou, Eryk Anders, who fought the Canadian at UFC 231 believes he knows exactly why.

“They booed him when we fought. I come to finish fights, that is what people like. At the end of the day, the UFC is a business,” Anders explained to BJPENN.com. “If you are getting booed and people don’t care to see you fight, they don’t have a reason to keep you. He’s a good fighter, though. He has that tough style, went 8-3 in the promotion, TUF winner. He had a great career in the UFC and will have a great career whenever he lands should he continue to fight. I just don’t think the UFC is interested in his style and antics.”

Eryk Anders is on a three-fight losing streak, but he knows his style is what keeps him in the UFC. He knows people want to watch him fight.

In the end, it was a move many believes was controversial. But Eryk Anders was not shocked to see his former opponent in Elias Theodorou get released.

Do you agree with Eryk Anders regarding Elias Theodorou’s release? Let us know in the comments section.