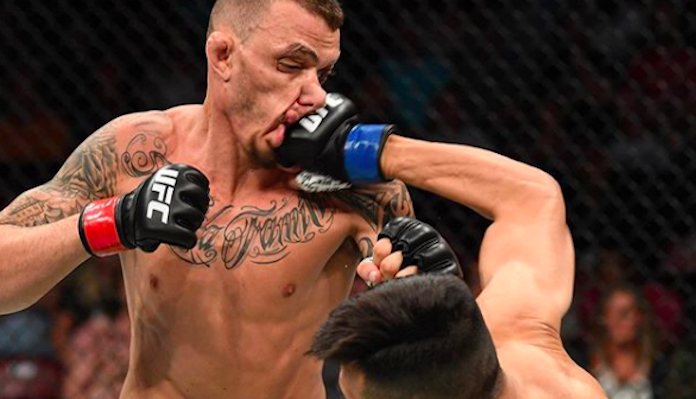 In the main event of Saturday’s UFC Greenville card, Renato Moicano sought to rebound from a TKO loss to Jose Aldo with a big win over fan favorite “The Korean Zombie” Chan Sung Jung. Regrettably for the Brazilian and his team, this fight went quite disastrously, as he was put down by a volley of punches in less than a minute.

Speaking to Combate shortly after this UFC Greenville setback, Moicano’s coach Gabriel de Oliveira claimed he has no explanation for this tough loss, and admitted that his pupil was too predictable in the cage.

“There is no analysis. There was no fight,” Oliveira said of Renato Moicano (translation via Bloody Elbow). “We are still flabbergasted, because that was one of the best camps Renato had. What happened is inexplicable. Maybe there was no technical mistake – because his technique is very refined – but he was predictable in there. He didn’t perform like he should. Maybe he was trying to take his time, but he was to aloof and his jab was studied, for sure. The guy learned the timing of his jab threw an overhand over it. You need to go in there turned up to 11. You need to be focused. We will have to go back to the drawing board, let Renato go a while without training, just rest. Then we’ll reassess some aspects of our training routines.”

The coach continued, explaining the Renato Moicano was well prepared for a long, gruelling fight — which makes this abrupt loss more difficult to swallow.

“He was okay, he was normal,” he explained. “He recovered well from the weight cut, he was relaxed as usual. I can’t explain what happened. We expected a long fight, five rounds. We expected back-and-forth action, but unfortunately he was unable to land a single punch. We were surprised by a strike we knew he would throw. We worked on that, we knew he would time the jab and throw the overhand. But I don’t know, I don’t know what happened in the fight. He [Renato] didn’t go. I don’t know if he was distracted. It’s hard for us to swallow that, honestly. We weighed all the pros and cons in that fight and we had everything in our favor. When the fight started, we just couldn’t bring those to work in our advantage.”

Were you surprised by the result of last weekend’s Renato Moicano vs. Korean Zombie fight?