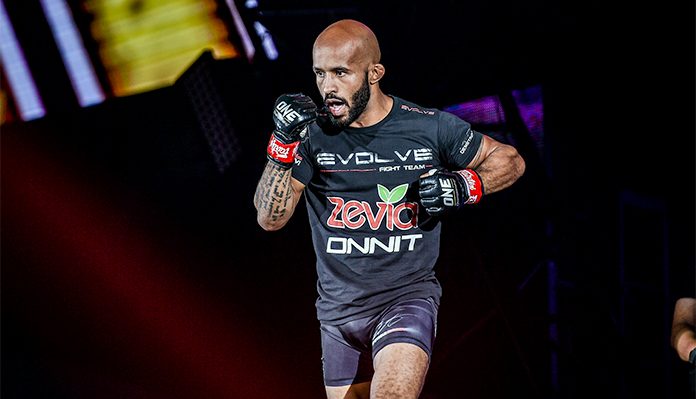 Demetrious Johnson didn’t have any hesitation when he got the call to have a special rules fight against Rodtang.

At ONE X in December, Johnson and Rodtang will fight in a special rules bout. The first and third rounds will be muay Thai will the second and fourth will be MMA. The rounds will also be three minutes and for Johnson, he’s super excited for the fight.

“I was just chilling at home and I got a call and next thing you know they wanted me to do this. I was like ‘send a contract’ and that’s how it went through,” Johnson said on Just Scrap Radio on BJPENN.com. “I’m super excited, super grateful for the opportunity, training is going great so far and now we have to stay healthy and make sure we are sharp for December 5.”

When the fight was announced, many figured Johnson would not want to engage with Rodtang on the feet and look to get it to the second. However, “Mighty Mouse” says that is not the plan as he thinks being cautious and trying to run will end up costing him.

“A lot of people think being cautious will be the best thing for me,” Johnson said. “It’s like a wolf, if a wolf is focused on fighting back, it tends to have a higher chance of survival rate. For me, I think fighting will be the best situation to make it. We are looking to go out there and compete and not be afraid.”

If Demetrious Johnson gets to the second round, he knows his confidence would grow. However, in three-minute rounds, he says it will be hard to get the fight to the ground and get a submission.

With that, Johnson is expecting this to be a tough fight but he is still eager for the challenge.

“Definitely get confident but he’s still dangerous and I still have to be careful. The second round starts on the feet, and it’s only three minutes,” Johnson explained. “Three minutes on the ground is time but it’s not a lot. Like when I get it there, you have to work right away… The biggest challenge of the fight, like on the feet, three minutes is a sprint but the wrestling and grappling aspect trying to get it there is a lot of work. It’s going to be a tough fight, Rodtang has a lot of experience in muay Thai and he’s tough. He’s considered the iron man for a reason.”

If Johnson gets his hand raised, he doesn’t expect it will do anything for him. Instead, he’s viewing this as a one-off fight and just a fun fight for his career.

“It’s a one-off fight, I’ll just be the same spot in the division, it’s just a fun fight. It’s something to say that I have done in my career,” Johnson concluded.

Do you think Demetrious Johnson will beat Rodtang?