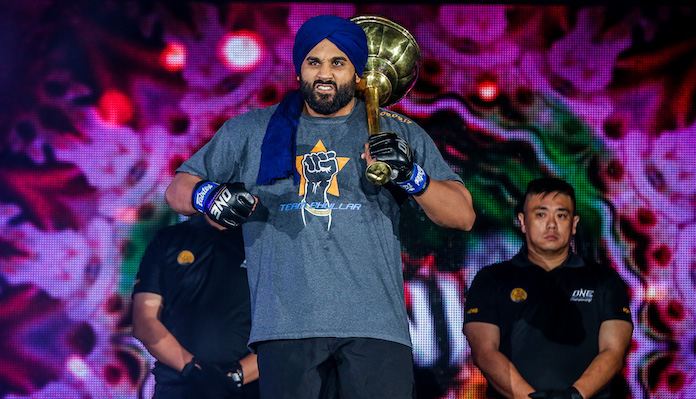 He’s expected to challenge ONE Heavyweight World Champion Brandon “The Truth” Vera sometime in 2021, but already, former UFC star Arjan “Singh” Bhullar is salivating at the possible matchups to be had in the newly-revamped heavyweight division in ONE Championship.

The 34-year-old is 10-1 overall in his career, with impressive wins over Marcelo Golm and Juan Adams, and a recent three-round unanimous decision victory over former ONE heavyweight title challenger and Cage Warriors heavyweight champ Mauro Cerilli.

When asked who in ONE Championship he would like to face apart from Vera, Bhullar responded firmly.

“No one is more important to me than Brandon Vera, at the moment. He is the task at hand and the job that needs to get done. Beyond that, I’m not focusing on anybody else. But the signings do make me very excited,” Bhullar said, before listing down a couple of potential names in ONE’s 120.2-kilogram division.

“’Buchecha’ (Marcus Almeida) is a very big one, Checkmat guy, one of the all-time greats with jiu-jitsu,” Bhullar added. “He presents some great challenges and a great puzzle to solve, a great competitor. And then there’s Amir Aliakbari, who obviously likes to be loud and has a presence online. That’s another guy. He likes to wrestle. Both of those guys stand out over everybody. I’m excited to test myself against each one of them once I get Vera done.”

Bhullar has his sights set on capturing the ONE Heavyweight World Title from Vera, who has held the strap since 2015. The Filipino-American has successfully defended the title twice, but has been largely inactive over the past five years.

Bhullar has been wanting a go at Vera since signing with ONE in 2019. The Indian-Canadian superstar revealed that he was originally slated to face Vera earlier this year, but due to COVID-19-related complications, the bout has been pushed back on numerous occasions.

“I’ve been out and it has been frustrating. We were booked earlier this year. I wish I knew what was going to happen. I do know that me and Vera are going to fight. That’s going to happen. If there was a little more certainty, that would be great but that’s just the nature of the beast and the way the world works right now,” said Bhullar.

“So I focus on the things that I can control and that’s getting better, focusing on my skill set, training, and staying healthy, spending time with family. I feel good, very rejuvenated. I’m just hungry to get going. Once this thing opens up, I’m going to go one after the other, starting with Vera.”

ONE Championship returns on Friday, December 4 with ONE: Big Bang, which broadcasts live from the Singapore Indoor Stadium in Singapore. The main event features a showdown between ONE Light Heavyweight Kickboxing World Champion Roman Kryklia of the Ukraine and challenger Murat “The Butcher” Aygun of the Netherlands.

Arjan Bhullar will be watching the card, especially since a bout between heavyweights Amir Aliakbari and Islam Abasov will be on offer. Bhullar thinks Aliakbari is favored to win the contest, but that fans shouldn’t count anyone out at this weight class.

“Prediction: Aliakbari comes in and he wins the fight. He controls it with his clinch work, gets the guy on the ground, rains blows on him. He tries to mix in a little bit of standup, but that’s his route to victory and he will impose that,” said Bhullar.

“Everyone is dangerous at heavyweight. Everyone is big and strong, with the ability to end fights, hurt you permanently, maim you. That’s the danger every time you fight with someone in this weight class. That’s why everyone tunes in. I don’t think anyone is illegitimate. If you’re in the Circle and you prepared for that walk, you are dangerous, and I will approach you as such.”

Do you think Arjan Bhullar is a future ONE Championship titleholder?