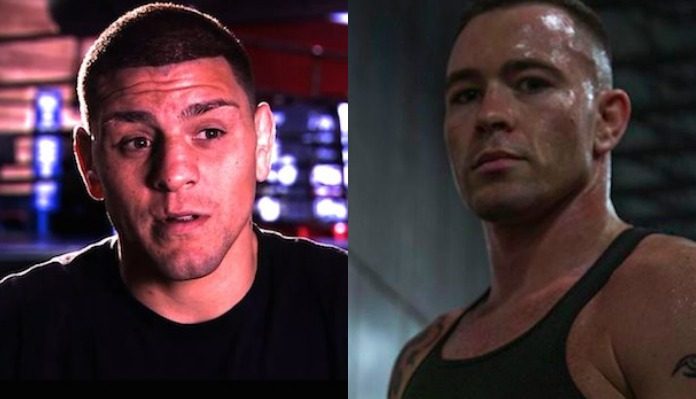 Colby Covington and Nick Diaz have gone back-and-forth in interviews trash-talking one another. It even got to the point where Diaz challenged Covington to a fight.

“I’m not gonna sit here and call the man a liar, I never heard about it, I just found out,” Diaz said of Covington’s trash talk to TMZ Sports. “If you wanna fight, you know where to find me. I’m not a hard guy to find. Step in my motherf**king range right here. Come at me, bro.”

Speaking on the latest episode of BJPENN.com Radio, Covington said he was offered a fight against Nick Diaz last year but it never came to fruition. He also claims the elder Diaz brother is scared to fight and should just stay retired as he is showing the effects of CTE.

“Yeah, I saw that video, man,” Covington said. “It was really sad. I think Nick Diaz is really starting to see the effects of CTE, he’s a mumbling, stumbling little dummy. The guy’s hooked on weed. He needs to get hooked on phonics. That guy’s embarrassing man. He’s taking way too many shots to the head to be talking like that to the welterweight king Colby ‘Chaos’ Covington. So there’s not really much to say. I hope he enjoys retirement. We all know he’s scared to fight because he was offered a fight contract last year, MSG and he turned it down like the little bitch, a little Stockton soy boy he is. Nick Diaz has the Stockton slap, but that ain’t got shit on me and what I got: MAGA bombs.”

Currently, neither fighter has a fight booked. Colby Covington was set to fight Kamaru Usman, but negotiations fell apart. Whether or not he gets a title shot is to be seen. As for Nick Diaz, he has not fought since January of 2015 when he took on Anderson Silva. He was linked to a fight against Jorge Masvidal at UFC 235 earlier this year though.

Would you be interested in seeing Colby Covington vs. Nick Diaz?