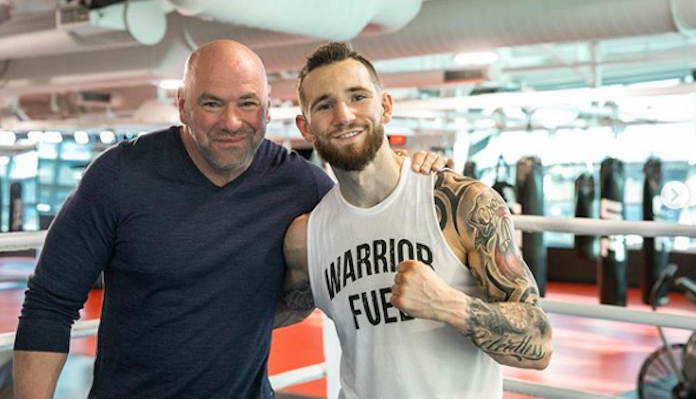 At 16 years old, Cody Crowley traveled to Las Vegas and snuck into the World MMA Awards. In the midst of all the excitement and fanfare, the young boxer met UFC President Dana White.

Crowley didn’t just pose for a picture with the UFC boss, he pitched him on a TV show.

“He just looked at me and laughed. He was like ‘come back to me when you’re older.'”

Crowley did that and more. Now 26 years old and flawless 17-0 as a professional boxer, the Peterborough, Ontario native is in business with White and the UFC.

Crowley has self-promoted the majority of his professional career thus far, deftly steering clear of restrictive, long-term deals with major boxing promotions — though the offers have certainly been there. Relying on his proven business savvy and the expertise of his new adviser Stephen Nelson, he recently inked a broadcast deal with UFC Fight Pass; the UFC’s official streaming service.

Crowley’s next self-promoted fight, a collision with Montreal’s Mian Hussain scheduled for October 19 in Peterborough, will mark his debut on this platform. He feels that this deal with the UFC, the latest milestone in a journey that has taken a garage in Peterborough to the Fight Capital of the World, Las Vegas, has been fated for a long, long-time.

“This was just meant to be,” Crowley said. “When I moved to Las Vegas at 21 years old, I had a 10-year gameplan that I would do absolutely nothing but eat, sleep, breathe boxing. When you do that, opportunities are going to present themselves. It’s only a matter of time. I’ve sacrificed so much that this feels like it’s meant to be.”

Crowley’s upcoming bout on UFC Fight Pass will not be a one-off. The Canadian plans to compete extensively on the platform, and his hoping White will be paying attention. The UFC boss has imminent plans to launch a long-discussed boxing venture called Zuffa Boxing, and Crowley is keen to be a part of it — so long as the dollars makes sense.

“This is like a partnership,” Crowley said of his working relationship with White and the UFC. “I would love to fight exclusively on UFC Fight Pass and keep building their platforms and keep raising my stock and value through the publicity I get from their platforms.”

Wherever he winds up continue, Crowley plans to represent his city — and the larger country of Canada on the sport’s biggest stages. He believes Canadians will return the favor by supporting him the same way they promote all of their athletes.

“I definitely want to become a world champion and be selling out arenas in Toronto, Air Canada Centre, stuff like that,” he said of his goals for his career. “You see the way Canada gets behind and supports [it’s athletes]. Everyone down here [in Las Vegas] notices how much Canada supports me. It’s amazing. Look at the [Toronto] Raptors. Look at the [Toronto] Maple Leafs. No matter how many times they lose, every single game, you see the stands full. Canada just supports, and people want to support a fighter. People want to follow that real-life Rocky story, and hope for the underdog, they just don’t have the proper horse to get behind. I truly believe that I can be that horse.”

Suffice it to say that Cody Crowley has big plans, and that he could soon become quite familiar to UFC fans. It all starts with his imminent showdown with Mian Hussain this weekend on UFC Fight Pass.

“You know, I’m not going to make a prediction for the fight. When you go in there, you’ve just got to get the job done,” he said. “I take guys into deep water, I like to suffocate them. It’s going to be deep waters, and whether he survives or not is going to be up to him.”

While Crowley is hesitant to make a prediction for the fight itself, he is willing to make another prediction. He believes his Fight Pass debut will be a star-making performance that introduces him to fight fans the world over and kickstarts a prolonged relationship with White and the UFC.