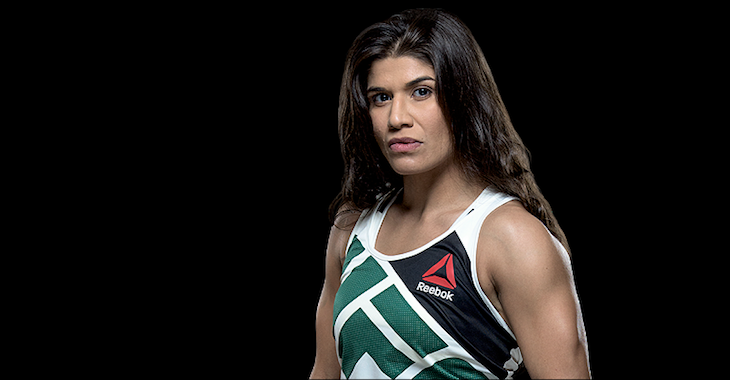 Jessica Aguilar, who is the former World Series of Fighting strawweight champion and the most experienced fighter in the UFC strawweight division, is looking for a fight – specifically, a fight at UFC 211, in her native Texas, on May 13.

Unfortunately, the 13th-ranked strawweight has had an incredibly difficult time locking down an opponent for this card, and with the date drawing ever closer, she’s getting desperate.

On Wednesday’s edition of BJ Penn Radio, the former WSOF champ explained her desire to fight on this card, and the difficulty she’s had in finding a willing dance partner.

“My target date is May 13,” she told host Kinch. “I really want to fight in my home state. My manager has been in touch with the UFC and has said that I’m on the Dallas card, but I really don’t know what’s going on. I think the matchmaker has something against me.”

“I’ve switched two opponents so far,” Aguilar continued. “[The UFC has] gone back to my manager; they’ve given them names. I’ve even gone as far as going onto Twitter and talking to these girls and confirming, and nothing happens, but I’m ready to go.”

Aguilar then offered up the names of the two fighters she momentarily expected to fight in Texas.

“There have been a few girls that have already agreed to it,” she said. “One was Maryna Moroz, but something happened where she wasn’t going to be ready for May 13. So they gave me another name: Courtney Casey. I went on Twitter and said something about that, and she agreed on it, but who knows. I just really want to fight on May 13.”

Given that May 13 is now so close, Aguilar explained that she’s willing to fight pretty much anybody. So if you’re a strawweight with an open schedule, get in touch with UFC matchmaker Sean Shelby.

“I want anyone available,” Aguilar said. “I want to get back in there. I don’t care who I fight. I don’t have 24 fights because I don’t like to fight. I’ll fight anyone. So anyone that’s available, please, step up, contact Sean, go on Twitter, go on Facebook, whatever you need to do.”

Who do you think Jessica Aguilar should fight? If you’ve got a potential opponent in mind, get at them on social media! Let’s get “Jag” a fight!