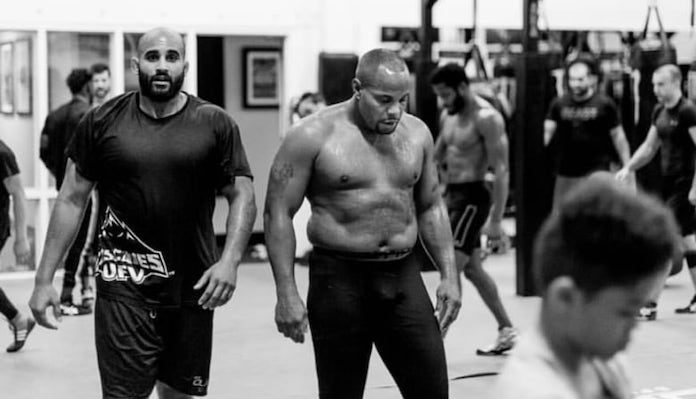 ONE Championship heavyweight contender Arjan Bhullar has known former UFC heavyweight champ Daniel Cormier for more than 15 years. He’s trained with Cormier at American Kickboxing Academy for many of those years. Based on that, watching Cormier lose the UFC heavyweight title to Stipe Miocic at UFC 241 was not easy for him.

That being said, Bhullar is still proud of his friend’s performance.

“It was bittersweet to see the result, and seeing it end the way it did was upsetting,” Bhullar told BJPENN.com, looking back on Cormier’s UFC 241 loss to Miocic, which came via fourth-round TKO. “That’s not how you envision going. But the reason I say bittersweet; the sweetness was that [Cormier] was winning the fight. He wrestled him up the first round, punched him up the following two, he looked good, man. He looked comfortable — almost too comfortable.

“I’ve known him for over 15 years,” Bhullar continued. “When you care for someone like that, it’s hard to watch, but it also gives you confidence knowing he was able to beat him in every aspect of the fight — obviously, without the ending in play.”

While Cormier’s UFC 241 fight did not go the way he and his team planned, he does hold a recent victory over Miocic. When the pair met for the first time in July of 2018, Cormier left the cage with a first-round knockout win.

Now 1-1 across two previous fights, Cormier and Miocic are expected to meet in a tie-breaking trilogy fight sometime in 2020. The bout will serve as Cormier’s final fight before retirement.

Initially, there was reason to believe that Cormier would forgo this tie-breaker with Miocic and simply hang up the gloves. In the end, however, he decided to delay his retirement in favor of a trilogy with his rival.

“As an athlete, you talk about it, you see it all the time: you always want to go out with your arm raised [in victory],” he said. “He deserves that [opportunity]. He’s earned that with his body of work. It’s never guaranteed, but you can always try to make it happen. If the will is there, you go for it, and nobody can answer that question for him. That’s up to him, and what he has inside. Is the will there? Is his family on board? Obviously the support network, in terms of the coaches, is always there, but it really comes down to him and what he feels inside, and it seems as though he feels [the will] is there. Everybody is going to rally around him. He’s the [American Kickboxing Academy] Captain for a reason.”

Arjan Bhullar believes Daniel Cormier will close the book on his career with a successful final chapter, especially having seen how valiantly Cormier fought until the moment of the stoppage at UFC 241.

“It gives you hope that he’s able to write the last chapter of his career on his terms,” Bhullar said. “It’s tough. Stipe is such a tough, tough competitor. He’s so resilient. But I think ‘DC’ is special. He’s shown that Stipe is hittable, he’s shown that Stipe can be taken down and held down. Although it’s not easy to take him down, [the possibility is] there. Without being biased, I obviously have to lean towards my guy based on those facts.”

Given Miocic’s toughness, Bhullar does next expect Cormier to have any easy time in this trilogy fight, but he does expect a victory from his teammate, potentially by late stoppage.

“You have to look at Stipe’s resilience, and you have to expect a long, drawn-out war; very taxing, very tactical,” Bhullar said, offering prediction for Cormier and Miocic’s third fight. “It’s going to be a fourth-, fifth-round kind of fight. That’s how I see it. It’s going to go deep, but it’s going to be our day.”

Do you agree with Arjan Bhullar on this one? Will Daniel Cormier close out his career with a victory over Stipe Miocic?