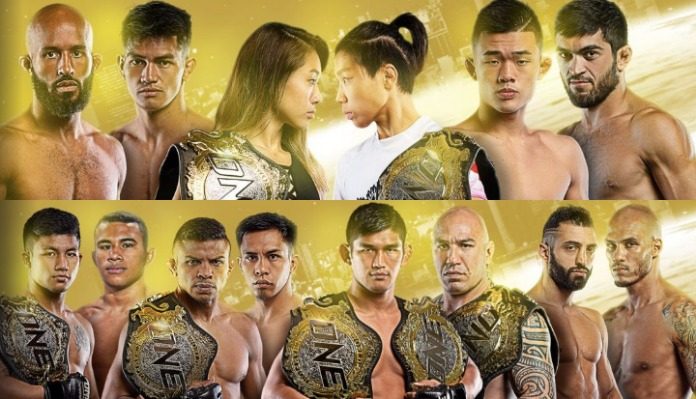 ONE Championship has stacked these two cards with some of its biggest names. The end result is an event that has fight fans the world over excited — and that includes ONE Championship fighters themselves.

Ahead of this stacked ONE: Century card, BJPENN.com reached out to several ONE Championship stars to see which matchups on the docket they’re most excited for.

Demetrious Johnson, the former UFC flyweight champion, is excited for a number of matchups on the ONE: Century lineup, such as the light heavyweight title fight between Aung La N Sang and Brandon Vera, and the ONE Featherweight Kickboxing World Grand Prix final between Giorgio Petrosyan and Samy Sana.

“I can go down the list. Aung La N Sang taking on Brandon Vera. You’ve got Giorgio Petrosyan taking on Samy Sana. You’ve got Senzo Ikeda fighting [Lito Adiwang] as well, Yuya Wakamatsu is fighting [Dae Hwan Kim]… I mean the card is just stacked. Angela Lee as well. She’s on a two-fight losing streak, I’m kind of curious to see how she bounces back. This card is sick from top to bottom.”

Danny Kingad, a representative of Team Lakay in Baguio City, Philippines, is most excited to watch his teammate Kevin Belingon rematch Bibiano Fernandes for the ONE Bantamweight World Title.

“On that card, I want to see Kevin and Bibiano’s fight. Last time they met in Tokyo, it was a disqualification. I want them to fight again to prove who’s the best.”

Angela Lee (Defends the ONE Atomweight World Title against ONE Strawweight Champion Xiong Jing Nan at ONE: Century – Part 1)

It should come as no surprise that Angela Lee is very excited to see her brother, ONE Lightweight World Champion Christian Lee, take on the destructive Saygid Guseyn Arslanaliev. Christian was not originally expected to compete on this card, but stepped in to battle Arslanaliev when Eddie Alvarez was forced off the card with an injury.

“Now I’m super excited that my brother is going to be fighting. I won’t be able to pay too much attention to [his fight]. We talked about it, and we talked about what would be best, and I’m not even going to be walking out [with him], cause I’ll be focused on my fight. But I’m super excited for Christian. He’s a champion for taking this fight on such last-minute notice.”

Kevin Belingon (Challenges Bibiano Fernandes for the ONE Bantamweight World Title at ONE: Century – Part 2):

“Dude, honestly, all of the scraps are going to be fire. But, I am excited to see Angela Lee and ‘The Panda’ Xiong Jing Nan. I’m excited for that scrap for real, but I’m going to have to watch that fight on replay because we’re going to have to stay focused on the task at hand.”

Arjan Bhullar, a former UFC heavyweight, is hoping to earn a title shot against Brandon Vera with a big win over former Cage Warriors champ Mauro Cerilli. As such, he’s excited to watch Brandon Vera drop down to light heavyweight to challenge Aung La N Sang. He’s expecting Vera to win this matchup.

“Vera and Aung La, bar none. I think Vera’s size is going to be too much to overcome. If Aung La can get him out of the first round, I’d like to see what Vera’s got, because he hasn’t been there in a few years. But I just think the size, and his experience, that’s going to be a huge factor.”

Which fights are you most looking forward to on this stacked ONE Championship card?