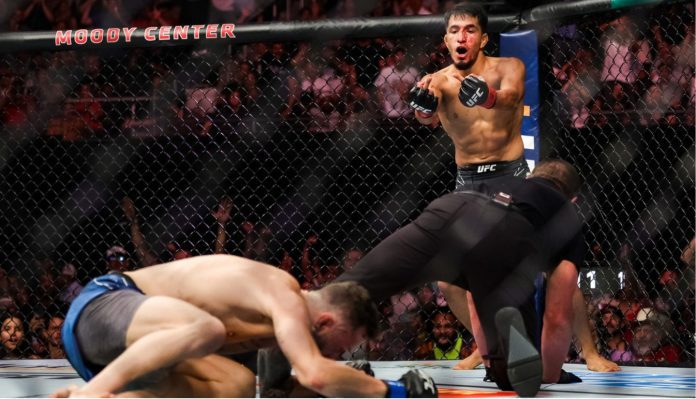 In the lead-up to UFC Austin, Kelley made some bigotry comments and Yanez was told by many people that he needed to KO the American. To only add to that, at weigh-ins and during the fight, Kelley was talking more trash. Even after after losing the fight Kelley continued to chirp which Yanez finds comical.

“He started telling me I’m the wish version of Masvidal and all this s**t. I could hear all the stuff he was saying, so I was annoyed by that, and then at the weigh-ins, as I was looking at my family and on the scale, I could hear him saying bring that a*s here boy. Like did this motherf****r really say that shit to me,” Yanez said to BJPENN.com. “Going up to him he started to talk s**t and I told him to make the weight as the weight miss annoyed me too. He then was still saying shit and in my head, I’m like I can’t wait to knock you the f**k out. Honestly, I also didn’t like how he was giving the middle finger to my fans and state…

“Now, he’s talking more s**t after being knocked out. I’ve been laughing about what he’s saying, all of his comments saying I’m scared to rematch him,” Yanez continued. “He’s not making himself look good, as he’s starting to say some f****d up stuff about Latinos. Like whatever, I’m not responding to him. I took his money and I turned him into a meme, it’s whatever.” 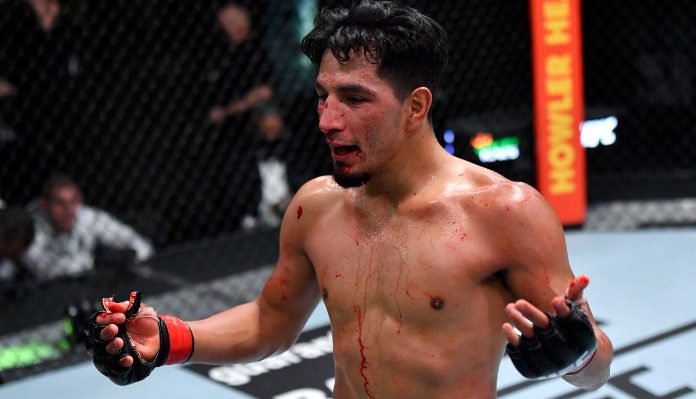 Ultimately, it was Yanez who got his hand raised as he scored a first-round TKO over Kelley which he says was a picture-perfect type of fight.

“That is a picture-perfect type of fight but I do wish I flatlined him on one punch, but being able to add some salt to it was all the memes that came out,” Yanez said. “That fight in general, it was a perfect fight and it went as I thought it would.”

Not only did Adrian Yanez get his show and win money, but he also got a $50k bonus for the KO and a percentage of Kelley’s purse for him missing weight. Along with that, given what Kelley said about Brazil, Yanez says Gilbert Burns also sent him some money which he says is surreal.

“He did follow up and send some cash, it was super cool of him to do that. He messaged me on Instagram first and I didn’t want to accept it and I told him he didn’t have to,” Yanez said. “Gilbert then said he didn’t have to but he wants to for knocking this guy out. It took a minute but I sent my information and he sent some money, like damn, thank you so much.”

The goal now for Yanez is to return in October and his eyes are set on Frankie Edgar as he believes it’s a fight that makes sense. He also wants to share the Octagon with the legend.

“In a perfect world, I’d like to come back in October,” Yanez concluded. “A perfect fight for me would be to face Frankie Edgar next as it’s a legend fight and would be a cool moment for me as I grew up watching him. It’s a legacy fight for me and it makes sense.”

Would you like to see Adrian Yanez fight Frankie Edgar next?