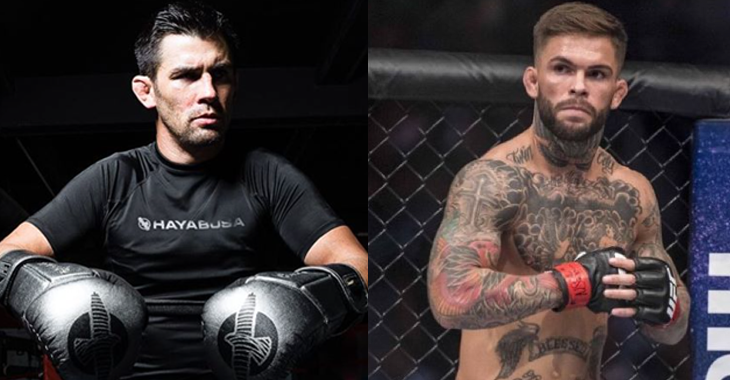 Going into the fight, ‘The Dominator’ and ‘No Love’ have never shied away from talking trash back and forth every opportunity they get. At UFC 202 back in August, where Garbrandt defeated Takeya Mizugaki via 1st round KO, he and the champ were forced to be separated backstage by Daniel Cormier when they began to get into a verbal altercation. Because of this, earlier in December, when the pair were both in attendance at ‘UFC Fight Night: Sacramento, they had to be in separate areas of the arena. Cruz appeared on the broadcast from the Fox Sports commentary booth, while Garbrandt appeared on the broadcast from cage-side. Despite that, Fox was forced to censor most of the interview due to inappropriate language.

In a recent interview with Fight Society, Garbrandt explained why he believes Cruz has already mentally lost the fight:

“He just can’t fathom that I went from unranked to fighting him in the same year. I went from unranked to world champion. He’s about to lose it all. He’s feelings the pressure. He’s talking all this s**t, he knows that his time is up. He’s already getting ready. You see his posts about how he didn’t need the belt, he realized he didn’t need the belt to be happy, so he’s getting ready for that next step. I can applaud him for that, he’s getting ready to step down and give me my belt. He kept it polished for me this whole year. I’m very thankful for that. He took care of it and I can’t wait to give it to Maddox.”

Garbrandt concluded by comparing himself to a shark, saying:

It’s like a shark when it smells blood and I smell blood all over that p**sy.

“I have one more man in my way. One more man that is a f**king busted up, crippled, decrepit old man trying to stand in my way… I am going to be world champion. You can put 10 Dominick Cruz’s in front of me, I’ll knock them all out. 10 out of 10.”