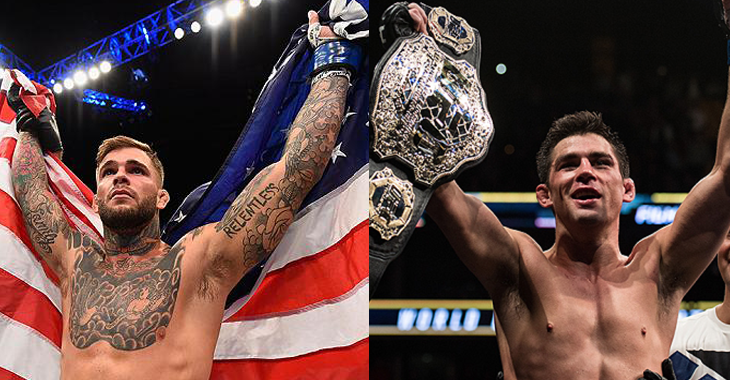 While UFC bantamweight champion Dominick Cruz and top ranked bantamweight Cody Garbrandt aren’t scheduled to share the Octagon until December 30th, the pair nearly had their fight for Cruz’s bantamweight title backstage at UFC 202 back in August.

According to UFC light heavyweight champion Daniel Cormier, Cruz and Garbrandt came face-to-face backstage, and got in each others faces as tensions continued to rise before they were officially scheduled to fight at UFC 207. When no one stepped between the two men to break things up before they got out of hand, DC leapt into action and prevented tensions from reaching a boiling point.

He recently recalled the situation in an interview with Independent.ie:

“Dominick and I were actually doing our co-commentary, which is right next to the Octagon. Dominick and Cody passed each other and both came face to face. Cody is in a nice suit and Dominick is in a nice suit. And these two guys are in each other’s face now.. All of our bosses from the UFC and the TV bosses were there, but no one knew what to do. Everyone just kind of stood back. It got to the point that I thought I had to get in the middle and separate those two guys. If it wasn’t for me at UFC 202, I think Dominick and Cody would’ve fought in August because none of our bosses and TV crew was willing to actually get in the middle of two 135-pound men. I thought that was funny because these are big guys, these aren’t little guys back there backstage. But they all stood there with their hands in their pockets not sure how to break it up and stop the fight. And I ended it up stopping it. I actually made them wait for UFC 207.”

This likely could be why Cruz and Garbrandt were forced to verbally go at it on camera this past weekend at ‘UFC Fight Night: Sacramento’ and were in two completely different parts of the arena despite the fact that they were both in attendance for the event. Who leaves Vegas with the bantamweight strap on December 30th?