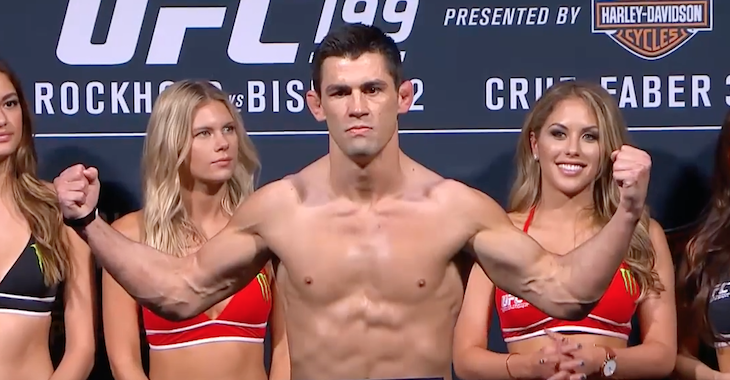 In just under one week, UFC bantamweight champion Dominick Cruz will step into the Octagon against #8 ranked bantamweight Cody Garbrandt in a highly anticipated grudge match for the bantamweight title.

While Garbrandt is entering the fight undefeated, on a 10 fight win streak that has seen him go 5-0 inside the Octagon, the champ believes that the challenger’s confidence going into the fight is nothing but ignorance. He spoke to MMAJunkie to discuss the fight, as well as Garbrandt’s recent comments leading up to the fight:

“The only difference between me and Cody is I’ve dealt with my demons and he’s still facing them. When he’s in there in the octagon with me he’s got another person to face on top of the demons he’s still already facing in his own personal life. I’m making him battle himself, his own intuition of himself, his own feelings of himself, his feelings about his past, because he refuses to deal with that on his own. He runs from it, and the more he runs from it the more I’m going to make him pay. And the more strength he thinks he has in life, I’m going to take those strengths away and make him deal with his own weaknesses. One of the weaknesses of Cody is his emotions. So, when I say stuff like that it attacks his emotions because he can’t control his emotions. He’s an emotional wreck. I just let him know that.”

“Let’s be honest here: The things he’s saying are a cry for attention,” Cruz said. “There’s no logical explanation for what he says, and there’s no proof behind what he says. What there’s proof behind is he knocks people out in the first round and he hasn’t gone much further. There’s proof behind he’s undefeated. But there’s proof behind Shane Carwin doing the exact same thing and getting smashed in the second round because he couldn’t get out of the first round against a top-notch competitor. That’s not be bashing Shane Carwin; that’s me bashing a style and type of style that has been so dominant for so long, so quickly with so much power that it actually works against you in the end.

“That’s what’s going to happen to Cody Garbrandt. He just doesn’t know it yet. Experience is bliss, and I’m going to be able to show him how ignorant he really is.”

While the two have been talking trash since long before the fight was ever officially announced, earlier this month things escalated when both men appeared on Fox to talk trash in a side-by-side video interview at ‘UFC Fight Night: Sacramento’. Only time will tell which man will leave Vegas with the bantamweight title on December 30th.