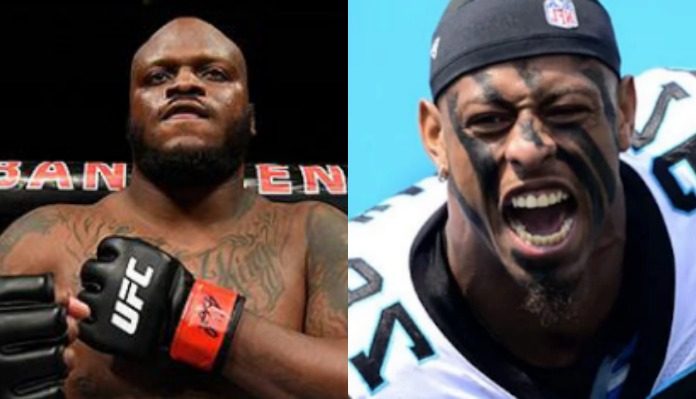 Late last week, news broke that former NFL player Greg Hardy will make his professional MMA debut on a summer episode of Dana White’s Tuesday Night Contender Series. Should Hardy win impressively on the show, he could well be awarded a UFC contract.

Hardy’s being granted a UFC contract, of course, would be incredibly controversial given the assault charge that festers in his past, which stems from a a 2014 attack on an ex-girlfriend. If the former Carolina Panther does join the UFC heavyweight roster, he can expect to be sought out by Derrick Lewis, who is hoping to dish out some justice.

“He’s a wife beater, I’d like to get in there with him,” Lewis told TMZ Sports when asked about Hardy (transcribed by MMAMania). “I like knocking wife beaters out. I’ll fight Greg Hardy. It’ll be like vice versa him beating on a woman. I’ll be beating him like he was a woman.

“I grew up watching my mom and my stepdad fight just about every single damn day,” Lewis added “Fist fighting every day for stupid stuff. I don’t tolerate stuff like that at all.”

Interestingly, the backlash surrounding Hardy’s potential move to the UFC has already begun. Perhaps the most notable instance of this backlash to occur thus far came from NFL insider and MMA commentator Jay Glazer, who implored the entire fight community to blacklist the former football player.

“It’s pretty cut and dry here, and I asked all my fellow MMA coaches not to give this guy a chance because he doesn’t deserve it,” Glazer said during an appearance on the The Rich Eisen Show. “It’s a privilege to play this sport or play football, and we here at Unbreakable Performance, and I know other places I’ve worked, we actually train women to defend themselves against people like Greg Hardy and with threats to violence. So yes, I’m calling on every other coach out there to not train this dude. He does not deserve it, he doesn’t deserve to be allowed to be around us, it’s not what we stand for. And I know people go, ‘Well, there’s a problem with domestic violence in MMA.’ There are individuals there who do that in our sport, too, and I don’t think they should be in our sport, either. That’s the bottom line. If you are violent with a woman, you play a violent sport, your privilege should be stripped of you. Greg Hardy, if you’re listening, choose another sport.”

Derrick Lewis returns to the cage at UFC 226, where he will collide with Francis Ngannou. Would you be interested in a fight between Lewis and Greg Hardy down the road?