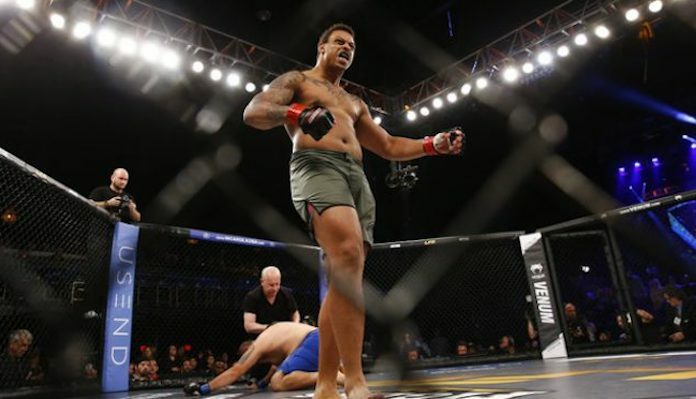 Former NFL’er Greg Hardy is off to a fantastic start as a mixed martial artist, having recently improved his amateur record to 3-0 with a 14-second stoppage of Ryan Chester under the LFA banner.

This week, Greg Hardy took time out of his busy training schedule to update us on his progress in the sport, his goals as a fighter, and much more.

Fresh off of a notable NFL career, what surprised you the most when it came to your initial transition into the world of MMA?

I would definitely say it was the training and the work ethic. The work ethic that the MMA community has, the best way to describe it is “non-stop”. These guys keep going and it’s something that I definitely had to acclimate myself to coming from a football background where the training is a lot different and a lot less high-intensity.

You train at one of the premiere MMA camps in the world, American Top Team. What led you to pursue this camp in particular?

I spent a lot of time with football trying to perfect my game and trying to train at the best places in the business in order to maintain my ability and rise to the top of the game. I felt like that would be a good blueprint to follow transitioning over to MMA so I found myself good representation and we sat and tried to figure out where was the best place in the world to train at and they gave me three different places. We tried out American Top Team and it was a fit and it’s all history from there.

Following you throughout social media, it seems you’re staying in the dorm facilities at American Top Team. How has that been working out for you personally and with your growth as a fighter?

It’s been good, man. It’s been good for my off the mat life and my on the mat life. I’m ready to train at all times but also I’m in a stable environment and a stable facility where I can work on myself without outside influences and also work on my game every day and get what I need to make that successful transition into mixed martial arts.

What are some of the main differences you’ve noticed between your NFL career and your career in MMA thus far? How does the training differ?

It’s a lot of mental training. There’s a lot of emotional control and mental stress that goes on on the mat. Also, it’s all about timing man. With football, it’s played in short bursts. There are little breaks in between each play. In MMA, it’s 100 percent go time until the bell rings. So trying to master that control aspect has been the most challenging for me.

You’ve put together a 3-0 record as an amateur, when do you feel you’re going to be ready to go pro? Are you interested in signing with the UFC right out of the gate or would you rather build slowly on the regional circuit?

We have a blueprint right now man and it’s really been working out well for us so I’m just making sure to pay attention to what my coaches are saying, stick behind American Top Team and listening to my representation. Personally, I’d say that I’m ready right now. I’d say that I’m ready right now. So, I think my next show will be pro. We don’t know if it’s going to be with a big promotion like the UFC or if it’ll be with somewhere like LFA but either way I want it to be soon. I’m ready to get back in there and test my ability.

You have yet to fight professionally but you have an irregular following for a regional level fighter largely due to being one of the rare cross-over athletes. Does this provide any added pressure going into future fights knowing you’ve got all eyes on you in a sense?

No, not really. It’s actually very exciting for me coming over from football and coming from those big crowds and arena. Being able to experience some of that love and appreciation. It gives me another motivating factor to be my best and take my game to another level. I’ve always loved being an entertainer. After I execute and do what’s best for my team, it’s always good to entertain. The fans are what make these sports and they deserve that.

You’re three amateur fights have lasted just over three minutes combined. Do you find there to be a downside to finishing your opponents so quickly and not being able to get multiple rounds of cage-time in? Do you think that may inhibit your growth as a fighter or do you leave that up to your training?

It’s a bit of a double-edged sword. Honestly, training at American Top Team you get the best of the best for training partners. I got to jump in on Aleksi Olenik’s camp, I’ve gotten to jump in on Andrei Arlovski’s camp and those have been great learning experiences for me while also learning from the best coaching staff in the sport. It would be nice to say I’m ready purely off of the training but not getting the live experience can definitely be a hindrance based off of my football career its sort of the same. I’m hopefully looking forward to being in the ring a little longer over the next couple of fights and executing. Getting to deal with a bit of adversity and showing the world what I’ve got.

Has anyone from the UFC been in contact with you or your team following your win at LFA 33 regarding your performance or a potential debut? Also, when are you looking to get back in the cage next?

I’ve seen Dana talking about me a little in the media saying all I’ve gotta do is prove myself. That’s enough for me right now. My representation is definitely in contact with many different organizations and we’re just trying to figure out what’s the best move for me right now. It’s all about development and doing it the right way. At first, when I announced I’d be transitioning over to MMA, everyone thought this was some sort of publicity stunt or just a razzle-dazzle flair thing but it’s 100 percent a passion of mine and something that has helped me get my life in order. It’s very important to me. I’m going to take my time, develop, and when I get my shot I’ll make the most of it.

We’ve seen before with high-profile and well-known athletes, a lot of the time Dana White and Co. love to showcase these sorts of prospects either on The Contender Series or on The Ultimate Fighter. Does being a part of one of these types of platforms interest you at all?

Definitely, man, it would be an honor and a pleasure. Like I said, I’m an entertainer. I love being out there making people smile and laugh and get a chance to showcase my ability at the highest level possible. I think something like the Ultimate Fighter would be right up my alley, man. They could get me someone like Austin Lane, another football guy making the transition and let us go at it, it would be a really entertaining event. You gotta respect guys moving like he’s moving. I’ve got a lot of respect for him and I would love to test myself against him. I think Dana White would love it and the fans would find it very interesting.