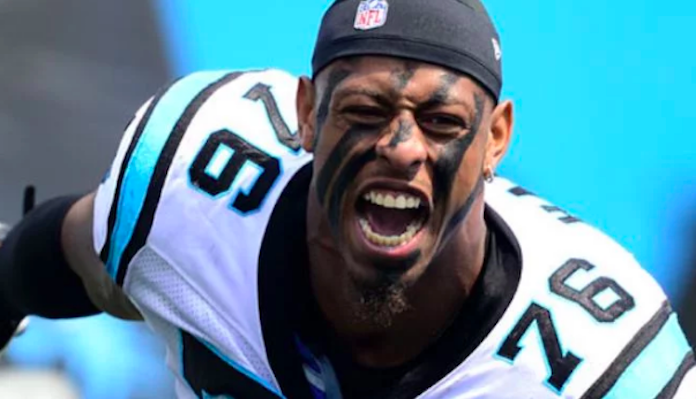 Having gone 3-0 on the amateur circuit, former Dallas Cowboy’s defensive lineman Greg Hardy is now poised for his professional debut. This professional debut will occur on an upcoming episode of Dana White’s Tuesday Night Contender Series, where he is expected to take on 5-1 heavyweight Brandon Sayles.

This news was first reported by Nolan King of MMA-Today.com.

A spot on Dana White’s Tuesday Night Contender Series, of course, does not guarantee Hardy a spot on the UFC roster. On the show, UFC contracts are only awarded to fighters who triumph in truly impressive fashion. Given Hardy’s controversial past—he assaulted an ex-girlfriend in 2014, and is said to have made threats against her life—there could also be other variables at play with respect to his potential move to the UFC.

In fact, there has already been considerable backlash with respect to Hardy’s possible migration to the Octagon. Long-time NFL insider and MMA analyst Jay Glazer, for example, has implored the entire MMA community to blackball the former NFL star.

“It’s pretty cut and dry here, and I asked all my fellow MMA coaches not to give this guy a chance because he doesn’t deserve it,” Glazer said during an appearance on the The Rich Eisen Show (via MMAMania). “It’s a privilege to play this sport or play football, and we here at Unbreakable Performance, and I know other places I’ve worked, we actually train women to defend themselves against people like Greg Hardy and with threats to violence. So yes, I’m calling on every other coach out there to not train this dude. He does not deserve it, he doesn’t deserve to be allowed to be around us, it’s not what we stand for. And I know people go, ‘Well, there’s a problem with domestic violence in MMA.’ There are individuals there who do that in our sport, too, and I don’t think they should be in our sport, either. That’s the bottom line. If you are violent with a woman, you play a violent sport, your privilege should be stripped of you. Greg Hardy, if you’re listening, choose another sport.”

Other members of the MMA community, such as veteran MMA reporter Josh Gross, have also commented on Hardy’s spot on Dana White’s Tuesday Night Contender Series on Twitter.

Though Hardy’s past is steeped in controversy, he would seem to have all the physical tools to thrive on the heavyweight savannah. And at just 29, he’d seem to have plenty of time to hone is skills. What do you think of the UFC’s choice to work with the controversial NFL veteran Greg Hardy?