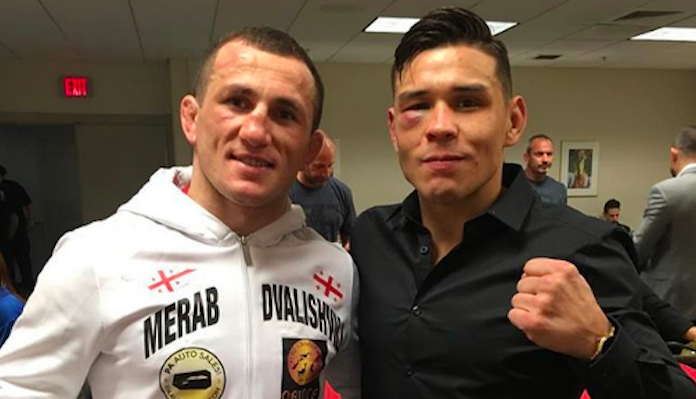 Last weekend, on the undercard of the UFC’s exciting stop in Atlantic City, NJ, Merab Dvalishvili and his short-notice replacement opponent Ricky Simon delivered an exciting, three-round war. Unfortunately, the end of this contest was ridden with controversy.

As the bout neared its conclusion, Simon — who seemed to be down two rounds — locked up a mounted guillotine. Though the choke seemed tight, Dvalishvili showed incredible toughness, refusing to tap and frantically flailing his legs in what looked like an effort to show the referee he was still conscious.

Once the final horn had sounded and the replay became available, however, it looked as though Dvalishvili might have actually lost consciousness at some point. After a few confusing moments, this resulted in a TKO win for Simon, rather than a decision win for Dvalishvili as initially expected.

Unsurprisingly, Dvalishvili is not happy about this outcome. The Georgian fighter, who maintains that he never lost consciousness during the fight, now plans to appeal the bout’s outcome, and also hopes to rematch Simon in the near future.

Dvalishvili looked back on this tough loss on Monday’s edition of The MMA Hour.

“I just feel like they took a win from me,” said Dvalishvili (transcribed by Shaun Al-Shatti for MMA Fighting). “Because, my opinion, I think I won. I won the fight. I never tapped. I never was choked. I don’t know what’s happened. I don’t have an answer for what’s happened. I never tapped. I was still in, I was just waiting for my time, when time’s finished, and that’s it. I won it. I was winning the whole fight. I was conscious for the fight.”

Dvalishvili then recounted the moments he was locked up in Simon’s choke.

“I know I have to just wait one minute, and when time’s over, I win. And that’s what I did,” Dvalishvili said. “I showed the referee I’m good, I’m fine. I was moving my feet, I showed everyone I’m good. And when the referee tried to touch me [to see if I was conscious] and he told me to ‘show me your hands,’ I showed him my hands, whatever, my eyes, everything. I was in. I never was out, so I feel very bad. And I took my time, I was ready for when time was over, and finally, thank God, time was over.

What did you think of Merab Dvalishvili’s bizarre loss to Ricky Simon?