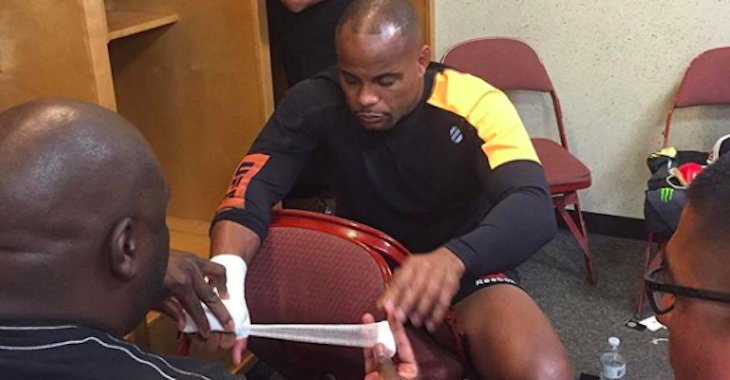 The fallout of Jon Jones continues. It was just last week that the GOAT candidate allegedly tested positive for the anabolic steroid Turinabol. Since then, media, managers, and UFC fighters alike have weighed in on the results of Jones’ testing and we’re still in the dark as to what will be the final call. Daniel Cormier appeared on The MMA Hour yesterday to open up more about how he feels. When Jon Jones was absent from competition the first time, Cormier faced a ton of backlash labeling him as the “paper champ” simply because he never beat Jon Jones. Now, those feelings rush back as a maximum four year suspension could be handed down to Jones.

“The sad thing is, man, I would actually fight him again. I just don’t know that there will be time, because at the end of this process, if there is a suspension, I will have run out of time, because I’ve always said that I won’t be fighting at 40, and I’ve done so much better than I ever could’ve envisioned when I started this career. If this is true, as it probably is — because USADA is a very upstanding organization, they would not have said anything if they just made a mistake — then I will probably run out of time, and the last time we fought will be the last time we fought. That’s the truth.”

“The crazy thing was that, the first time [in 2015], I got a lot of, ‘you were given the belt,’ when in reality I won the belt by fighting Anthony [Johnson]. This time, I think I would be given the belt because of what happened. As a competitor, I know that we fought. But if he was not fighting cleanly, then how it that fair to me? So if — and I keep saying ‘if’ because again, Jon is entitled to due process — if it is proven that he was dirty, then we would not have fought anyway, and I would still have my title regardless. So yeah, I will take the belt, I will be a proud champion, just as I was before, because I will show people what the belt means. Now, if it comes back that it’s not dirty, then I go back to work to get a belt so that I can find a way to fight him again for a title.” — Daniel Cormier speaking to Ariel Helwani on The MMA Hour.

It’s clear that Daniel Cormier would still love to test himself against Jon Jones again, but if Jones is really out for four years — even two years — it may be too long for Cormier to wait. Regardless, if he is given the belt again he will carry and defend it proudly until he retires. Let’s just hope that all this Jon Jones controversy is just a mistake and Daniel Cormier will get one last chance at tackling his greatest rival.