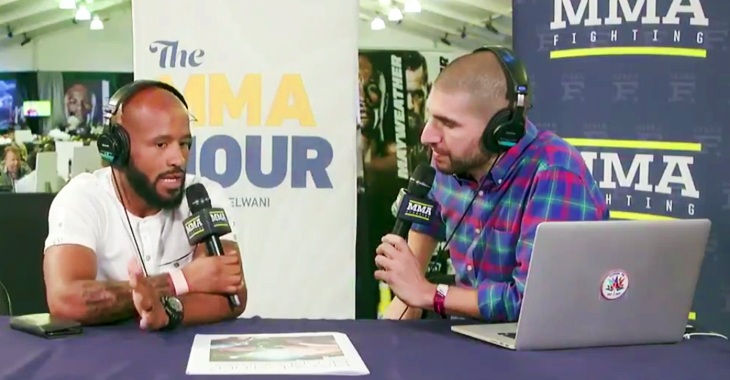 Everyone has weighed-in on Jon Jones and the results of his drug test: Dana White, Daniel Cormier, Anthony Johnson, and hoards of others on the internet. The opinions have been just as diverse as the current (and still) UFC light heavyweight champion’s combat arsenal. His manager has gone on record supporting his client’s innocence and even went so far as to say it may be a set-up. What makes Demetrious Johnson’s two cents different, is that he details how he himself avoids “tainted supplements” or popping unexpectedly.

“It’s unfortunate you know. its very hard to fail a drug test. I don’t take any supplements. I don’t take any ibuprofen, Tylenol, I don’t take nothing. I just got swimmer’s ear. The first thing I did was text the UFC’s doctor, I call Jeff Novinsky, I say ‘I got swmmer’s ear, I need to get antibiotics,’ because you never know what will show up for the tests.”

“I was about to take Tylenol for [Kyoji] Horiguchi and they were like, no, no, no! They said, ‘No, you have to take aspirin instead or you’ll pop.’ I give [Jon] Jones the benefit of the doubt, but it comes from one stream. From your c-ck to the cup. You just don’t pop. It doesn’t just show up in your system. Who’s going to try and frame him? The UFC? He’s making the UFC money. Daniel Cormier? It’s you and the USADA person. It’s you and one other man handling your urine. It’s sealed laser tight. No one knows it’s his. Only two people know it’s his sample when it goes out. Even the lab doesn’t know who it is. They don’t go, ‘who’s number 262195?’ They test it and send it out.” — Demetrious Johnson speaking to Ariel Helwani in a special live episode of The MMA Hour tonight.

Well, that answers the question about how Demetrious Johnson feels about the supposed conspiracy surrounding Jon Jones’ test. It’s also a incredibly detailed look at just how careful UFC fighters have to be, or, how careful Johnson chooses to be. It must work, Mighty Mouse has never popped. However, as we have seen through out the years as our heroes drop off one by one, no one us safe from USADA.