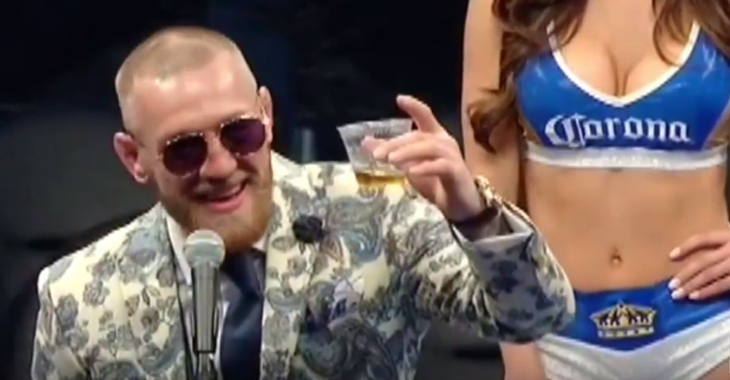 Of all the things you could say about Conor McGregor, one thing is certain: You have to call him a business man. He earned an estimated $230K per second in his fight with Jose Aldo, the numbers he earned during the Floyd Mayweather fight absolutely dwarf that. However, that’s just fighting money. McGregor enjoys the luxury of being sponsored by Monster Energy and Rolls Royce just to name a few, but what really is setting McGregor up to continue making money after fighting is his own ventures. He’s already had his own Reebok shoe, released a workout program, partnered with David August for a clothing line, and now he’s about to make sure he gets a piece of your money at the liquor store.

It’s obligatory now to see Conor McGregor toasting whiskey, sometimes costing more than your car, whether in victory or defeat. Usually it’s a fine aged Irish whiskey older than your grandmother. While we can’t taste for quality yet, McGregor assured everyone after his fight with Floyd Mayweather that we’d be able to try ‘Notorious’ Irish Whiskey soon. After all was said and done, Conor McGregor revealed he’d be going to Ibiza for a friend’s wedding and taking out a 100ft yacht, then he’d come back and figure out his next move in the fight game. We can only imagine how much of his own whiskey he will drink while cruising in that salty, ocean air. Man, it’s good to be McGregor even after a loss.

My favorite picture I snapped tonight.

Who wants a drink of Notorious Irish Whiskey with #ConorMcGregor? pic.twitter.com/Oj88KhN3PB