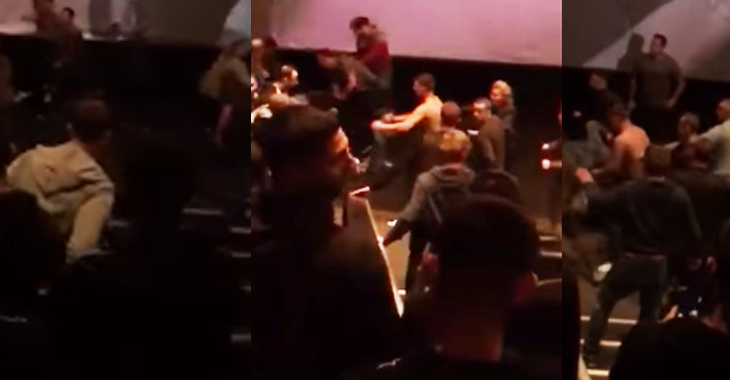 If you’re reading this, you were probably invested enough in Conor McGregor and Floyd Mayweather’s fight that you were involved in some debating pre-fight, maybe even post-fight. No matter which side you were on, chances are you argued with someone online or lost/won a bet with a friend in real life. You definitely know some of these conversations got so heated, that a fight was going to break out. Especially in Vegas, where booze rains down like public fountains. Even Brendan Schaub and Nate Diaz got into it backstage. But in a movie theater? Over across the sea in the UK, around 30 people got wrapped up in a fight as the boxing match ended inside the cinema.

“‘It was all over as quickly as it started,’ said one person who was in the cinema at the time. ‘But there was probably about 30 people involved. There was only about three security guards. ‘The staff did their best but they were clearly outnumbered. It was clear some of the people involved had been drinking. A spokeswoman for Vue said: ‘Vue screened the fight to over 8,500 customers across 47 cinemas. ‘Cinemas had increased security, strict access policies and procedures and strict alcohol policies in place. ‘We can confirm there was one incident which took place. The safety and security of our staff and customers remains our top priority at all times.” – From The Daily Mail.

That looks like a soccer fight in the middle of a movie theater. Is this really footage of the crowd, or is this the big battle scene from a Dark Knight Rises bootleg? It was dangerous enough watching fights until 1AM in a bar, now you can’t even watch one in a quiet theater without something like this happening. Luckily no one got seriously hurt, but let this be a lesson learned: No fight is worth actually fighting over and the exits are usually directly on your left and right.