Please tell me your sitting down, because if not you’re about to cause a public disturbance or potentially wound yourself from flipping out. According to TMZ, Jon Jones has just tested positive for the anabolic steroid Turinabol. Via their report, he will be stripped of his newly-acquired UFC light heavyweight title he reclaimed at UFC 214 against Daniel Cormier and potentially banned for four freaking years.

I'll look into this TMZ report, but this isn't good.

Turinabol — the anabolic steroid Jones reportedly tested positive for — I'm told can be taken orally, like a pro hormone.

Unfortunately, it looks like it’s all true according to the official UFC statement: 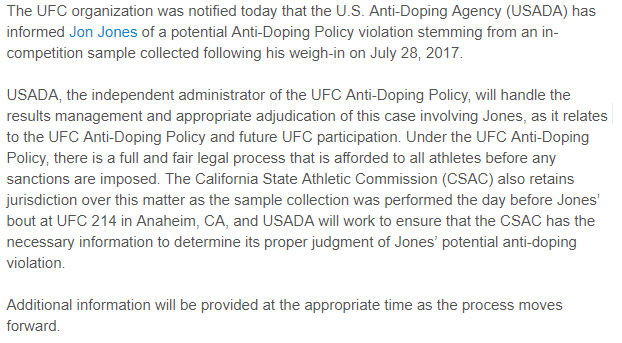 Dana White tells me Jon Jones has been flagged for a potential violation, but has not yet been stripped of the title

Dana White has confirmed to media that Jon Jones has been flagged for in-competition test, White says he hasn't officially been stripped yet

The weird thing is that Dana White actually isn’t going to strip Jon Jones yet. It seems like the UFC is just like us, holding out hope that somehow this is a false positive or he took some sort of happy pill like last time. However, if he really is banned for a long period of time, they’ll have to strip him. This not only means that the undisputed greatest of all time could be ripped away from us as soon as we got him back, but that it puts Daniel Cormier in a horrible position again. He will be given back the light heavyweight title without having defeated the rightful owner again, and thrust back into defending it again. Maybe fans will give Daniel Cormier an easier time this go around.