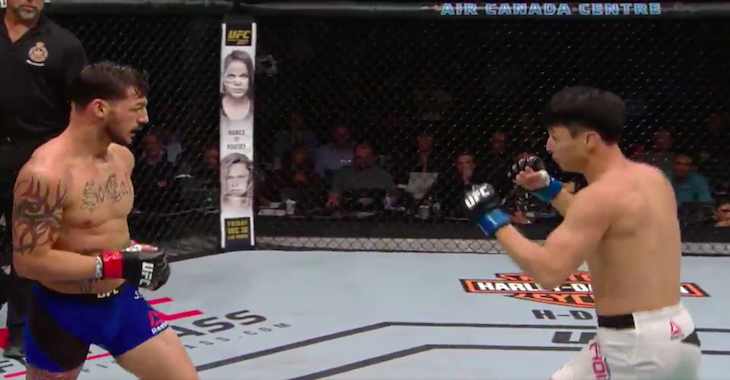 Last night, the UFC touched down in Toronto, Ontario, Canada for the first time since September of 2013. The organization did so with UFC 206, a card that, despite being criticized for its lack of big names, produced some of the most memorable moments of the year.

Some of the highlights of the card included Lando Vannata’s highlight reel, wheel kick knockout of John Makdessi, Donald “Cowboy” Cerrone’s third-round head-kick destruction of Matt Brown, and Max Holloway’s interim featherweight title winning TKO of former lightweight champ Anthony Pettis. As exciting as all of these moments were, however, they all paled in comparison to Cub Swanson’s and Doo Ho Choi’s main card featherweight war.

For three, frenzied rounds, the crafty veteran and torpedo-fisted South Korean prospect pelted each other with a ridiculous array of strikes, each staggering the other on more than one occasion. By the time the third round ended, it had been a fired up Swanson who had landed the fight’s more meaningful offense, which earned him a unanimous decision win. That said, the heart and technique displayed by both men assured that the fight had no real loser.

Given the thrilling nature of this fight, which is considered a strong contender for Fight of the Year honors, it should come as no surprise that it generated awesome reactions from many of the games top fighters and personalities.

Here are our favorite reactions to Cub Swanson and Doo Ho Choi’s unforgettable featherweight war, including those of five current UFC champions.

I'm such a big @CubSwanson fan. So happy to see him win that fight.

THAT WAS THE FUCKING MAIN EVENT FOR ME… excuse my language. #ufc206

I'm happy for Cub. He was being used as a stepping stone to me and he came back and said fuck that.

Damn fight of the year!?

Hats off to the veteran @cubswanson

The @Cubs Win again! #UFC206 All hail the #Bambino

So I think we got ourselves another #FOTY candidate! SwansonVSChoi #UFC206

This hard-fought decision win pushed Swanson onto a solid three-fight win-streak. He’s now 24-7 overall. Choi, meanwhile, had a three-fight streak derailed by the loss. The 25-year-old now sits at 14-2 overall, though he assured he’d never lose again in his post-fight interview with Joe Rogan.

What did you think of this hellacious featherweight battle? Sound off in the comments section, PENN Nation!