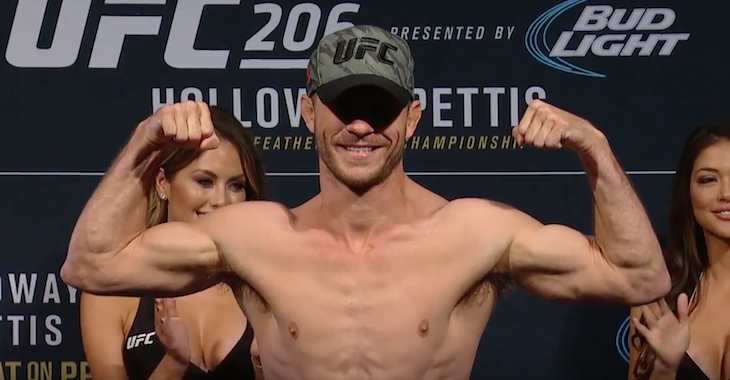 Round one begins and Brown starts off applying pressure early. Cerrone with a combination. Cerrone with a body kick and then a high kick and Brown looks to be in trouble. Matt swings a combination that misses. He is still the aggressor but eats a nasty leg kick. Brown with a nice combination. He follows that up with a right hand. Cerrone fires back with a leg kick and then a left. Brown continues to stalk him here. He connects with a hard kick to the body of Cowboy. Cerrone with a jab and then a hard leg kick. Cerrone goes upstairs and rocks Brown with a head kick. Somehow Brown stays on his feet. That was nasty. Matt continues to press forward but Donald is connects with a pair of jabs. Brown charges forward with a big combination and lands it. He lands a huge left to the body. Cerrone charges forward and takes Brown to the floor. He ends up in a tight triangle choke. This is deep. Cerrone pulls out but is now in an armbar. Brown cannot secure the submission. They get back up and Brown lands a nice right before the horn.

Round two begins and the fighters start trading shots early. Brown with a very crisp jab, He drops Cerrone with a right hand. Donald pops back up but eats another solid combo from Brown. Matt is chasing after him here. He lands a right and then a left. Cowboy with a high kick and then a right hand that drops Brown. Matt pops back up and lands a hard elbow. Cowboy lands a right over the top and then another. This fight is intense. Brown goes upstairs with a high kick that partially lands. Cerrone has Matt bloodied up. He lands a hard right. Brown eats it and returns fire with one of his own. Cerrone replies with a body shot and then a jab. Brown circles and lands a right hand. The fighters trade rights. Brown lands another. Matt charges forward but Cowboy connects with some nasty body shots that keep him at bay. Brown misses with a spinning round house kick to end round two.

OHHHH @IAmTheImmortal tags Cerrone and hurts him in round 2!!! #UFC206 https://t.co/6N8BJy3cab

Round three begins and Brown charges forward and lands a takedown. Cowboy springs back up and lands a left hand. He follows up with a right that stuns Brown. Cowboy goes upstairs with a head kick that floors Brown. This one is over!