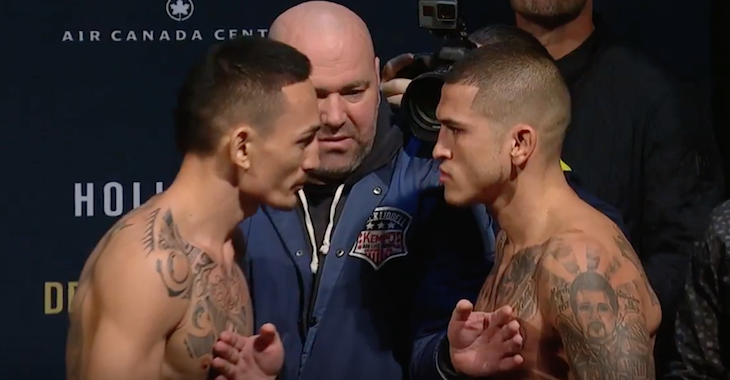 Round one begins and Pettis comes forward with a push kick. Max responds with one of his own. Holloway pumps the jab. Pettis circles out and lands a low kick. Anthony moves in with a right hand. He connects with an inside leg kick and then throws a switch kick that connects to the body. Holloway with a push kick but Pettis replies with a nasty body kick. Max goes to the body with jab. Pettis lands a hard spinning back kick. Holloway attempts to come inside with a trip. He doesn’t get it. Pettis circles and lands a push kick. Max fires back with a low kick of his own. The fighters exchange jabs. One minute remains. Pettis circles and comes forward with a right. Max responds with a leg kick and then a left hook. Pettis throws a right that misses. Max counters with two nice right hands. Pettis looks for a takedown but the horn sounds to end round one.

Round two begins and Holloway opens with a hard jab. The fighters trade low kicks. Holloway pressing forward. Pettis tries a cartwheel kick up top, but it’s blocked. Pettis pressing now but Holloway is countering well. Holloway with a left to the body. Pettis is moving forward and looking to strike. Holloway with some shots. Pettis firing high kicks. One minute remains. Pettis presses him to the cage. Holloway gets an overhook and defends the takedown. Round two ends.

Round three begins and Pettis lands a pair of hard low kicks to start. Pettis told his corner that his right hand is broken between rounds. Pettis with a nice push kick. He follows that up with a roundhouse kick that connects to the face of Max. Holloway fires off a kick that connects with the groin of Pettis. We restart and Holloway lands a nice combination. Pettis with a leg kick. He goes high but misses. Max with a beautiful trip takedown but then lets Pettis back up. Anthony pushes Max against the cage and begins working some knees. They break and Anthony lands a hard leg kick. Max with a straight right and Pettis respond with one of his own. Max goes to the body with punches and Pettis responds with a kick. Max scores another trip takedown and ends up in side control. He opts to stand back up and lands a spinning back kick. He goes to the body with punches and then unloads on Pettis with head strikes. The referee steps in and stops the contest.