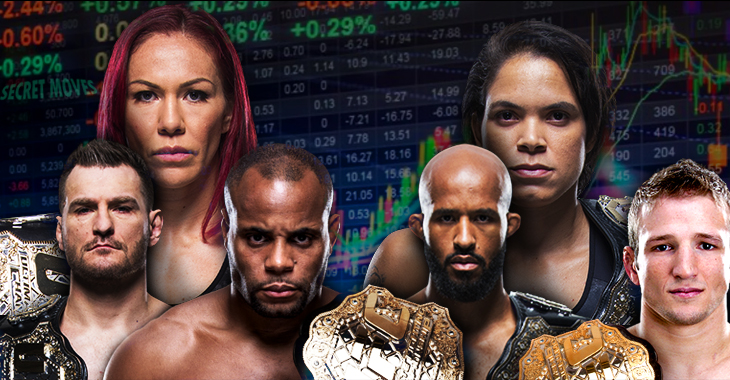 Somewhere someone is looking at numbers skyrocket. The engagements and impressions are out of control. Suddenly, a dull UFC week is sparked with an army of 14,000 fire emoji. This is what happens when the UFC announces a fight the magnitude of Daniel Cormier moving up to face Stipe Miocic for the heavyweight title. A tweet like that holds its own gravitational pull. It drags in thousands who release their own satellites out to orbit around the news. People message friends, they send out hyperlinks and quote RTs. The drop of the information is like an event in and of itself. However, not every match-up is like this. Most entire cards aren’t like this. Nowadays, it takes an adrenaline shot to remind fans that MMA is still exciting as hell.

Is this the way the UFC stays alive?

Before the ginormous sale, the UFC ramped up their fight cards like the climax of a Michael Bay movie. This all culminated in their pay-per-view draw poster boy fighting Eddie Alvarez in unprecedented champion versus champion main event at UFC 205. Since then however, things have dwindled. Conor McGregor is gone along with other marquee names like Ronda Rousey and Jon Jones.

Meanwhile, the UFC is facing their most important contract negotiation in the last seven years: A TV deal. You’d expect a similar burst of slobberknocker Fight Night cards. That has not been the case. As their contract with FOX expires, the UFC has put on shallower and shallower free cards while sneakily raising PPV prices. Are they keeping up with the trend of viewers pulling the plug by serving up must-see scraps that force fight fans to empty their wallets? Or are they not wasting popular talent to air on a network they don’t believe they’ll be on much longer?

Can’t overstate enough how important 2018 is for the UFC. They need to score big with their TV deal and every decision is geared around that. They will pull out every rabbit possible to be a hot commodity as talks heat up. So expect more of the unexpected.

“It’s the superfight everyone wants. I think TJ [Dillashaw] and I are both on board. We just want to make sure it’s on a stacked card. We want to make sure we can benefit from a good pay-per-view buy. I think I deserve it and I think he deserves it. I’d rather have somebody else [be the] main event, who is going to bring in way more PPVs. In my opinion, that’s held up the fight on my end. I’ve seen guys jump on [stacked] PPV cards and make $1.5 million, fighting an inferior opponent than who I’m about to fight. Me and TJ could fight on a smaller card and pull 275,000 buys, get an extra check for $75,000.” — Demetrious Johnson speaking to ESPN’s Brett Okamoto.

It’s not just the decision of the Powers That Be, UFC talent don’t want to be relegated to Fight Pass or a FOX card to collect a fraction of what they’d make either. Fighters aren’t just waiting for a Conor McGregor or a Georges St-Pierre to come back to potentially get booked with them in a ‘money fight’, they want to fight on the same card as them. More and more, fighters like Demetrious Johnson are joining forces with their foes to make sure they get cut huge checks for these superfights the UFC are focusing on in desperate times. Daniel Cormier even rang up Stipe Miocic to make sure their money was right for UFC 226.

The Times They Are A-Changin’

All roads lead to Las Vegas! @StipeMiocicUFC & @DC_MMA to coach #TUF27, will face off at #UFC226 for the HW strap!

“I think it’s okay [to put on three champions versus champion superfights] because here’s the deal: Out of those six champions, five of those weight classes don’t necessarily have a clear cut person that the champion should be fighting. Who is Stipe [Miocic] supposed to fight next if they weren’t willing to give Cain [Velasquez] a title shot right away? Who am I supposed to fight next unless I just go into a rematch with Alexander [Gustafsson]? Who is Cyborg supposed to be fighting? No one knows what’s going on with Megan Anderson. Who is Amanda [Nunes] supposed to fight next? I guess Raquel Pennington is injured are something. Five of these champions don’t have clear cut, number one contenders. While we’re doing these fights, while you put all these title fights on the same card, then you let the division sort themselves out so come the end of year, a new contender has truly shown themselves.” — Daniel Cormier speaking on The MMA Hour.

Nearly every division in the UFC is in some sort of strange paradox. An argument presented by Daniel Cormier for the slew of superfights is that there are really no clear-cut number one contenders. In actuality, there is always another contender. The real problem is that, despite a cult following for the Swede, a Gustafsson rematch will not draw big numbers. Their fight at UFC 192 only raked in 250K PPV buys. Going down the line from Miocic to Johnson, merely defending against the next in line isn’t going to do the UFC’s (or the fighter’s) wallet any favors

This is where the UFC could be on the verge of morphing to thrive. When the fighters taking out the next best in line doesn’t move the needle, they’re forced to do something different. The fans may still complain about the rankings being meaningless, but the stats don’t lie. They tune in and in numbers that dwarf anything else. St-Pierre’s jumping the line against Michael Bisping was the biggest draw of last year. McGregor not defending a title and fighting Nate Diaz at welterweight did the biggest numbers of all-time. Take a look again at the six gold belts and legacies on the line of those who are fighting — potentially on the same card — this year. If 2018 is a cocoon, this could be your first glimpse at the new UFC spreading its wings.