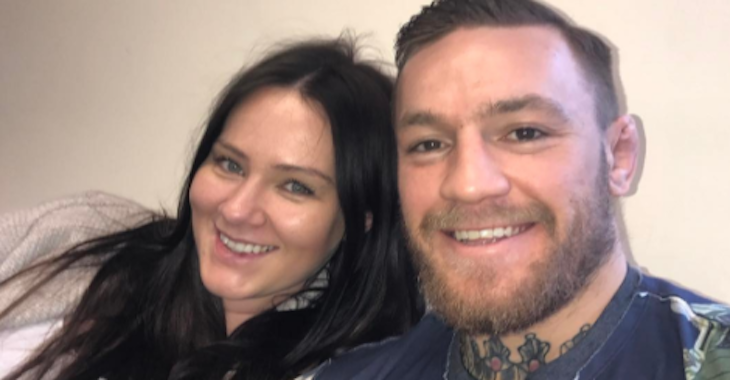 Back in November, Conor McGregor delivered a second round knockout of Eddie Alvarez, becoming the UFC lightweight champion in the process. Given that he still owned the promotion’s featherweight title at the time, this made him the first fighter in UFC history to hold titles in two weight classes concurrently. With this accomplishment, McGregor’s stock rose higher than ever.

Despite the new and unprecedented heights of his stardom after his knockout of Alvarez, McGregor followed this win with the news that he’d be taking some time away from the sport. The reason, he announced, was that he was expecting his first child with long-time girlfriend Dee Devlin.

Over the weekend, the MMA power couple had their child. Devlin gave birth to the baby, named Conor Jack McGregor, at the Coombe Maternity Hospital in Dublin, Ireland at approximately 8:00 local time on Friday evening.

Though some celebrity couples seek to shelter their newborns from the public eye, this does not seem to be the plan for McGregor and Devlin. They have already created an official Instagram account for the young Conor Jr., which is already verified. On Sunday morning, McGregor also shared the first photos of his newborn son. See them below!

“Dee and Junior are doing great, everyone,” McGregor said in his first post. “Thank you for all the kind words, I am one proud and blessed Daddy.”

We can land the left paw from anywhere. Who wants it. pic.twitter.com/T32lRNnsOB

“We can land the left paw from anywhere,” the champ said jokingly in his second post. “Who wants it?”

At the moment, McGregor has no plans to return to the Octagon. That said, he has spent the last few months chasing a possible boxing mega fight with recently un-retired great Floyd Mayweather – though his new fatherhood looks as though it will put these plans on hold.

Who do you want to see the new father Conor McGregor fight next?