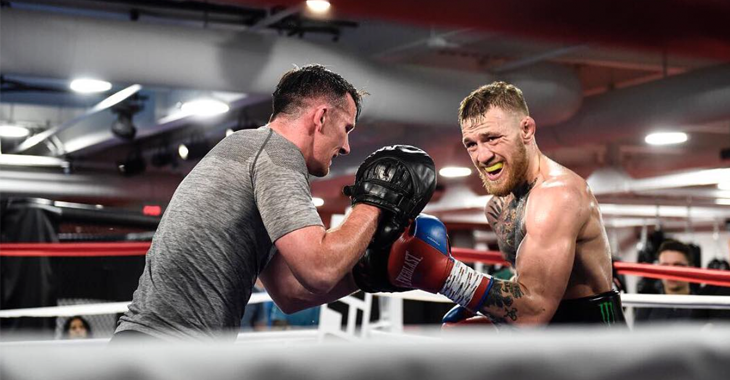 It comes as no surprise to former IBO and IBF welterweight boxing champion Chris van Heerden that Paulie Malignaggi and Conor McGregor’s relationship ended on a sour note. Van Heerden also helped McGregor out with some sparring for his rematch with Nate Diaz and was at the punching end of an edited video clip that made its way to the Internet.

Van Heerden told MMAJunkie Radio that he spoke with Malignaggi before joining the training camp and Malignaggi went in with good intentions.

“It was like, ‘You know, guys, you’re all going to be surprised – Conor is not bad,’” van Heerden recalled of him speaking with Malignaggi before their fallout (transcribed by Fernanda Prates for MMAJunkie). “And I thought, ‘You know what, these guys are buddy-buddying. And good for them.’ But deep down, I was expecting something to come out eventually. And it did. And I was like, ‘Exactly what he did to you guys, is what he did to me.’ And I was called a snake. But the only difference is I had footage. Paulie doesn’t.”

The former welterweight boxing champ said that as bad as it sounds, he was actually relieved to see the outcome of the Conor McGregor and Paulie Malignaggi relationship. To see what happened to him happen to Malignaggi in the same manner of being disrespected, it showed that “The Notorious” is simply in it all for himself.

With some experience in the ring with McGregor, van Heerden admitted that the current UFC lightweight champion’s counter punching, precision, and timing were quite good, referring to his straight left as “beautiful.” However, van Heerden also saw some glaring weaknesses when sparring against him last year.

“His footwork is all over the place,” van Heerden said. “He’s dropping his hands, and he’s putting his chin out there. Stuff like that. Pretty bad. He doesn’t throw in combinations. That’s the big thing that MMA fighters lack. And that’s the upside of boxing.

“When I wanted to put Conor on his back foot, it was too easy. It was really too easy. And Conor is bigger than me. Believe it or not, I was surprised at the size of Conor, him being that big, how easily I could put him on his backfoot. Because I knew my footwork was in place, and his wasn’t.”

Van Heerden feels if Conor does not want to get embarrassed, he needs to make the fight as ugly and wild as possible. If he tries to implement what he has learned in boxing, van Heerden gave his own “mystic” prediction for the fight