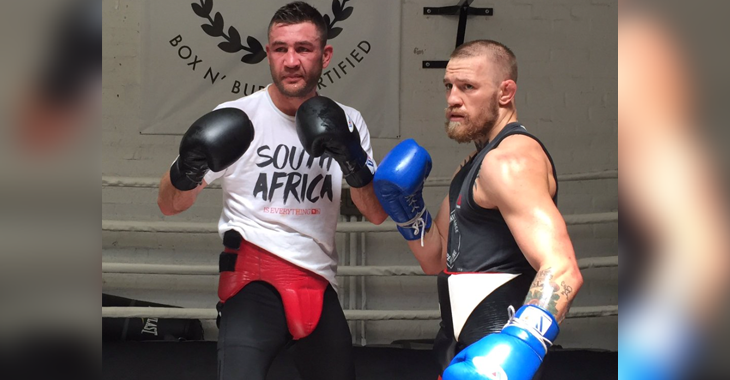 One of the biggest draws of the Floyd Mayweather vs. Conor McGregor boxing spectacle is seeing how competitive it will be between the two combat sports superstars.

Many from the boxing world are not giving Conor McGregor much of a chance. Longtime boxing analyst Max Kellerman has gone as far as to claim that “The Notorious” will not land a single punch on the defensive boxing genius.

On the other hand, many believe McGregor has the skills to do what past opponents of Mayweather such as Manny Pacquiao and Canelo Alvarez could not accomplish in the ring and hand “Money” the first loss of his professional career. To counter Kellerman, former UFC veteran Brendan Schaub has offered the boxing analyst a $100,000 bet that not only will McGregor land punches but will also win rounds in the fight as well. One person who may have the most knowledge to make any sort of claims is former IBO and IBF welterweight champion Chris van Heerden. The South African boxer sparred with McGregor ahead of the UFC 202 rematch against Nate Diaz and had some friction following their sparring when footage from their sparring session was leaked, showing an edit of McGregor getting the better of van Heerden. Van Heerden later released unedited footage from their sparring session that told a different story.

With the boxing match between Mayweather and McGregor now official, MMA Junkie caught up with van Heerden to get his take on all the events that have unfolded since he sparred with “The Notorious” last year.

“When people ask me why I’ve released this footage now, it’s because it hurts me that there are guys like myself who have been devoted to this sport, risking our lives,” van Heerden said. “And to see McGregor, who has zero knowledge of professional boxing, make it out like he could just get out of an octagon, step in the ring and beat up the best pound-for-pound fighter out there – to just make out like our lifestyle is so easy and that anybody could do it, and then for people to be saying he has a big chance of beating Floyd. I just thought, judge for yourself.”

Given his experience sparring with McGregor, the former boxing champ believes that “The Notorious” is in for a bad night.

“It’s not like Mayweather is up against a guy with exceptional knowledge of boxing,” he said. “Floyd will walk him down, put him on the back foot, and Conor will go into survival mode, and then Mayweather will beat him up.

“Those are the type of punches that put you in the hospital – the ones where you keep taking punishment.”

Van Heerden, who has been speaking with Mayweather promotions to get on the undercard against WBA welterweight champion Lamont Peterson says if there is any chance for McGregor to win, it will have to be early in the fight and just “drop his chin, pick up his hands and go like a bull.”

“The way he fights in the UFC, he puts his chin out there to taunt you, and he puts his hands down, because he’s so good with that counter precision. He’s going to try that with Mayweather, and it’s not going to work.

“We’re finally going to prove that a boxer is on so much of a higher level than a UFC fighter when it comes to this type of standup fighting. It’s going to be a big win for boxing.”