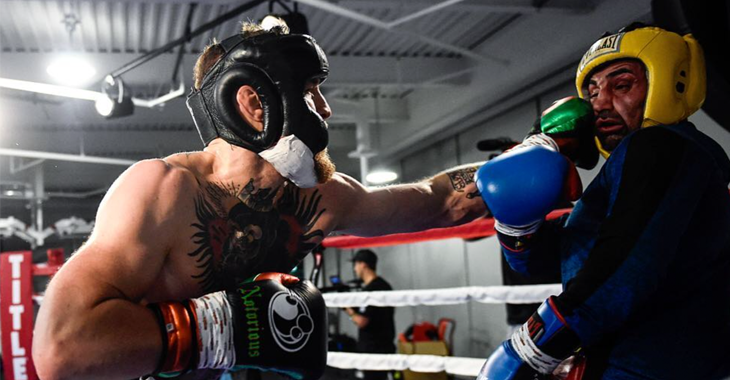 The latest news surrounding the mega-money fight between Floyd Mayweather and Conor McGregor is all about the sparring sessions and fallout between “The Notorious” and former two-weight boxing world champion Paulie Malignaggi.

A series of photos that allegedly made Malignaggi look like McGregor got the best of their two sparring sessions made the recently retired boxer remove himself from helping with the fight camp feeling like he was “exploited.”

Tiernan Bradley, another sparring partner of McGregor’s for this fight camp wrote a piece for The Irish News to address what he saw happen during Malignaggi’s time in camp.

In regards to Malignaggi saying he “beat the brakes off” McGregor and wanted the unedited footage to be released of their sparring, Bradley said Malignaggi may regret bringing up any video of their second sparring session.

“Paulie came out smack talking from the start, he was saying ‘wipe that smirk off your face’ because Conor was smiling at him, that kind of thing.

“Conor stayed very professional; Paulie was saying stuff and then getting hit. Conor chose his moments to talk back. There are tactics to mental warfare too, knowing when to talk, and then there’s stupidity.

“It wasn’t a one-sided spar either way but I thought one was the clear winner overall and that was Conor. He was very calm, very professional and, honestly, he really impressed me on the day.”

In regards to the knockdown or pushdown photo depending on who you believe, Bradley didn’t say what exactly happened and will leave it up to the viewer when “the footage is eventually released.”

“When you join a Conor McGregor camp, you know pictures are going to be released every day. Sometimes they might not be the most flattering,” Bradley wrote, bringing up a photo of McGregor blasting him with an uppercut during their sparring.

“Paulie’s at a different stage in his career than me. I’m only starting out, he’s a two-weight world champion who has featured in some huge fights.

“Obviously he saw that picture and his pride was dented. I can understand that, but at the same time he was on TV doing interviews the week before, talking about Conor’s power being overblown and all this stuff.

“He was talking to Mayweather’s guys, talking to pro boxers and doing interviews – what did he think was going to happen? Did he expect to just come in here and talk shit?”

What are your thoughts on what Tiernan Bradley had to say in regards to the entire situation? Let’s discuss this in the comment section.