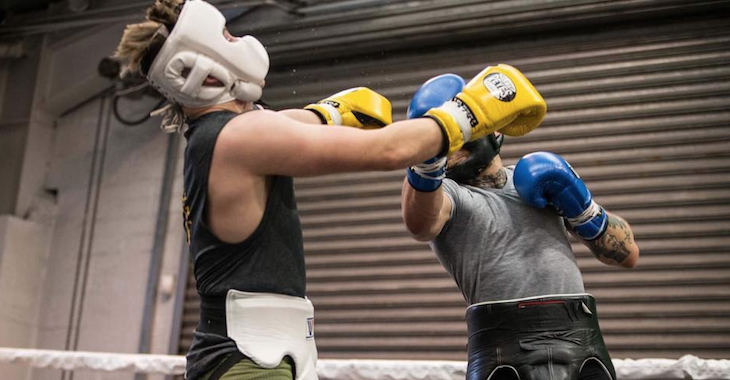 Ahead of Conor McGregor’s highly anticipated showdown with Floyd Mayweather on August 26th, the UFC lightweight champion enlisted the help of several elite level boxers to assist him in the monumental task of shocking the world on August 26th.

One of the men brought in to aid Conor McGregor is 6 time Irish boxing champion, and Commonwealth silver medalist Tiernan Bradley, who boasts a 98-12 amateur record, and has spent the past 13 years learning to move, and punch, like Floyd Mayweather.

While Bradley admits that he doesn’t always necessarily fight like Mayweather in his fights, he does use Mayweather’s strikes and movements as “tools” inside the ring.

“People laugh when they hear me saying I can replicate Mayweather. I guess nobody can move like Floyd, but I’ve been studying everything about the guy for the last 13 years.

“I know what way he moves and I know how he moves into his punches. I know how he reacts to getting hit. I feel like I’m able to bring that in to help Conor as he prepares for this fight.”

In regards to his experience sparring with McGregor, he stated:

“I’ve got a black eye at the moment and I got that from him when he was wearing 16-ounce gloves,” Bradley said.

“I don’t know if you’ve seen the photo that he uploaded onto his Instagram after our session. People are talking about his left hand and whether the power will be there with 10-ounce gloves — he lifted me off my feet with a right uppercut in 16 (ounce gloves)!

“That shot came out of nowhere. It was so fast and powerful. I can tell you now that those kinds of shots would drop boxers, and that was his right hand. He will definitely keep his stopping power with 10-ounce gloves on.”

Only time will tell whether Mayweather will be able to take one of McGregor’s punches.

Tune in August 26th to find out.