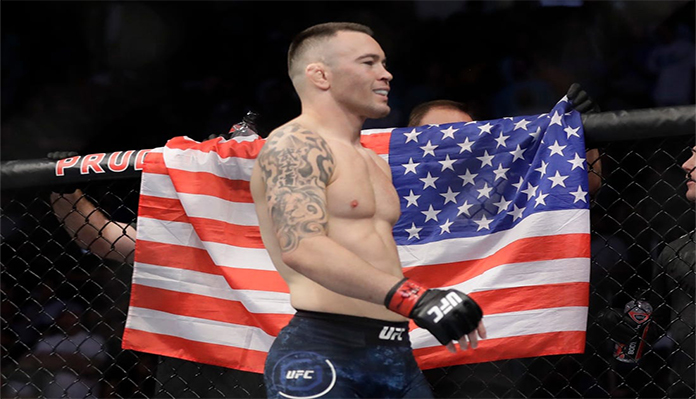 Colby Covington has never been one to hold his tongue, no matter the consequences. With that considered, it should have not come as a surprise when the former interim UFC welterweight champ parted ways with American Top Team.

Having been at odds with several of ATT’s top talents, it seemed like only a matter of time before the end of Colby’s relationship with the gym became an eventuality. Even though Covington always gave praise to facility owner Dan Lambert, the Oregon native felt that he was being held back by bureaucracy.

Recently speaking to BJPENN.COM Radio, Colby Covington dished on his side of the story and made clear what factors led to his departure. “My brand was being held back being at American Top Team,” said Covington. “I have nothing but respect for Dan Lambert. The guy’s been nothing but a mentor and a good friend, but you cross the line when you try and tell me what I can and cannot do in the professional fighting business. We’re getting locked in an Octagon to kill each other, take each other’s brain cells, send each other to the morgue, and you’re worried about some words that I might be saying? It sounds a little petty and a little childish, and I didn’t have time for that anymore. I got big business to take care of.”

When asked if the enactment of American Top Team’s ‘no trash talk’ policy was the final nail in the coffin for his relationship with the team, Covington replied, “Yeah. That was completely the ending of our relationship as a team and being a part of that team anymore. You’re not going to tell me what I can and cannot do. Your team’s name is American Top Team. Just think about that for a second, American Top Team. What are our constitutional rights in America? Do we not have freedom of speech?”

Colby continued, “It’s not fair to try and take someone’s voice away and their platform and try and tell them what they can and cannot do, especially in the fighting business. It’s already an ugly business as it is. Then to be mad about some words when we’re getting locked in a cage to kill each other in our underwear on Saturday nights, it’s just a little pathetic, and it’s not right, but I have no ill will towards it. I think Dan had to do what he had to do, and he felt that it was right to implement that policy for the team.”

In regards to his ATT teammates making complaints against his brash promotional style and outspokenness playing a contributing factor in leaving, Covington said, “Yeah, that’s exactly right. A lot of people were complaining. A lot of people were up in their feelings. They don’t understand it. They don’t understand the psychology that goes into it. There’s a reason that no one can do what I can do. There’s a reason why people actually are drawn to me. There’s a reason I’m the people’s champ. I fight for the people. I speak for the people. I think people like that I’m real and I stand up. I’m not afraid to say the cold, hard truth. If you’re not okay with the brutal, honest truth, that’s your problem. Facts don’t care about your feelings. They’re still facts.”

Regardless of Colby Covington’s antics within the realm of promotion, he maintains that he has always strived to be a team player. Now focusing solely on his own development as an athletes, Colby expressed relief in being able to handle his affairs how he sees fit. “I don’t want to be a distraction,” said Covington, “I’ve always been all about teams and putting in the work and helping everybody. I’d help the amateurs. I’d help anybody in the gym that was there. For them to try and tell me to put limits on my career and what I can do, was just, It wasn’t right. This is the best thing that could ever happen, to form Colby Covington Incorporated and just start on my own way. Now I don’t have to worry about how people feel. I do what I want when I want, and that’s the motto at Colby Covington Inc., is that we do what we want when we want, and no one’s going to stop us. If they got something to say, come meet us in the Octagon.”

All in all, Colby Covington believes his newly found freedom comes as a recompense towards the future of his competitive career, and he intends to make the most of it. “This has been a great transition. I feel free. I feel like I had cuffs on me before and I was being weighed down. Now I just feel completely free. I’ve never felt this sense of energy before. I feel unstoppable. I really do know that when I come back, it’s going to be a whole different me, a Colby Chaos Covington 2.0, and it’s going to be a completely different look the next time you see me in the octagon.”

This article first appeared on BJPENN.COM 7/1/2020