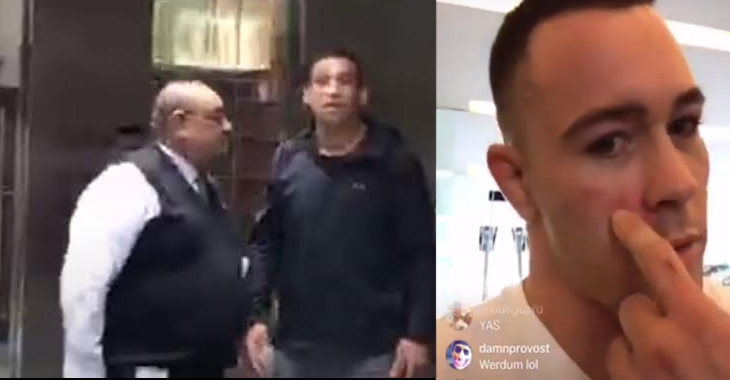 Just when you thought it was safe to go to a UFC meet and greet. Colby Covington and Fabricio Werdum are both in Sydney, Australia and put on a show for everyone, the remnants of only exist from an Instagram live video rip. According to Covington, the video starts right after Werdum suckerpunched him without warning. Although, his actions could probably be traced back to his comments about the people of Brazil in his post-fight speech after defeating Demian Maia. What happened next is Covington going completely off in a verbal rant against Werdum which is sure to offend a lot of people.

Don’t know the full details yet but hearing that there was an altercation in Australia between Colby Covington and Fabricio Werdum and it got physical. Still waiting to find out more or what exactly happened.

“Look at this clown. You’re a f-cking clown Fabricio Werdum. What’s up? You just punched me in the face. You wanna come punch me again b-tch? What? What? Yeah, you think you’re so tough. Look at you, you fucking f—got. Yea, that’s right, you’re a little b-itch. What? Hey, yeah I’m going to see you soon. I’ll see you soon. See you soon motherf-cker. You’re old motherf-cker, you ain’t sh-t. F-ck Brazil. F-ck Fabricio Werdum. Little b-tch ass. F-ck Brazil. Bunch of filthy animals. And they wonder why they get talked to like that because they’re a bunch of animals. How f-cking funny dude. Dude punched me in the face. ” — Colby Covington speaking on his Instagram live video of the incident.

Down below, you can see an earlier video where it looks like Fabricio Werdum does his Colby Covington in the face with a boomerang. While we only get one side of the story, this isn’t the first time Fabricio Werdum has been in a confrontation with another UFC fighter outside of his weight class. Before UFC 214, he and Tony Ferguson nearly got into at a UFC media lunch and dropped some slurs on the interim lightweight champ. Details are scarce right now, but this is sure to be a talking point for the rest of the week.