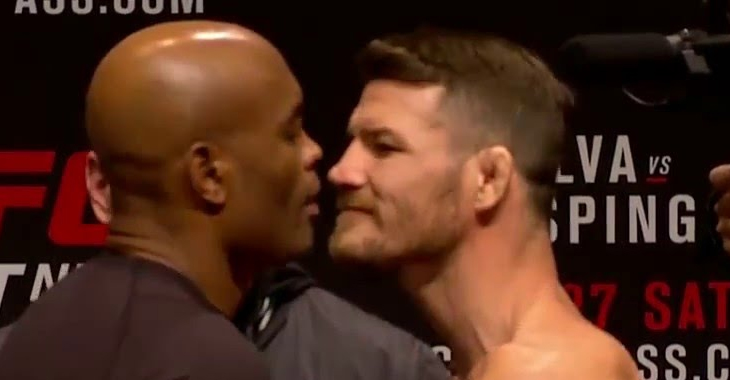 The news hit last week that the legend Anderson Silva has been flagged for a potential anti-doping violation. Everyone knows the incredible things that Silva has accomplished in his career. On top of beating the best at two weights, he was a UFC champion and held a record that last for years before Demetrious Johnson finally beat it. However, Michael Bisping thinks that this latest news from USADA tarnishes Silva’s historic career.

“This completely destroys [Anderson Silva’s] legacy, in my opinion. There’s a lot of people who have short memories and they’ll just remember his performances. His performances were great. But if you test positive for steroids twice — once, you can try to talk your way out of it; twice, I think the nail’s in the coffin. The guy was a cheat and it’s shame. It’s really, really disappointing. I was a huge fan of Anderson Silva. It’s just disappointing and it’s a black eye for the sport of MMA.” — Michael Bisping speaking on the UFC Shanghai media conference call. This is Anderson Silva’s second time being flagged by USADA, the first time was back in 2015 after his fight with Nick Diaz at UFC 183. Michael Bisping beat Silva in an infamous fight from UFC London at the beginning of last year. At that point, it was the biggest victory of his career and was instrumental in him getting a title shot on short notice against Luke Rockhold at UFC 199. The rest is history.

“Now that USADA is clamping down on performance enhancers, people are getting popped left and right. They still have a long way to go, but people are getting caught, and that’s what counts. It’s funny, now that we have USADA in the mix, I’ve become world champion! I’ve been here all this time, and yes, I have improved, and my coaches have worked hard with me to get me where I am, but USADA’s presence and my becoming world champion isn’t such a crazy coincidence. I think there’s a reason for that. It’s disgusting to see that people are still taking performance enhancing drugs and it puts a bad name on the sport as a whole.” – Michael Bisping writing for Champions.co back in January.