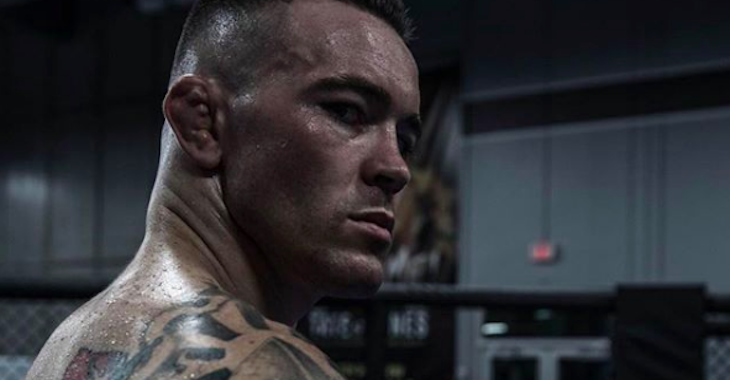 After a competitive opening round, “Chaos” was able to take control of the fight in rounds two and three stuffing all of Maia’s attempted takedowns.

The Brazilian submission specialist, Maia, was left bloodied and bruised by Covington who has now established himself as one of the welterweight divisions top fighters.

You can get the full Covington vs. Maia fight recap below:

Round one begins and Maia comes out quickly with a jab. He lands a nice left hand and Colby smiles. Another nice left hand over the top from Maia. Covington goes high with a kick but Maia blocks it. The American presses forward with punches. Maia avoids any real damage and lands another left hand. Colby is backing up now. Maia shoots for a takedown but Colby is able to defend the shot. Both fighters connect with straight lefts. Colby fires off a nice leg kick and then another. Maia lands a clean left hand. Covington replies with a hard low kick. The Brazilian circles and then lands a right jab. Covington is bleeding now. Maia avoids a superman punch and lands a right hand. Colby with two more hard low kicks. He presses forward and lands a left hand. Maia with some good shots in the pocket. Colby returns fire with a right jab. Colby with a leg kick followed by a flurry of punches. Maia replies with a left hand and then an uppercut. Maia shoots for a takedown but it is not there. The fighters are back on their feet and the horn sounds to end round one.

Round two begins and Maia shoots in for a takedown but Colby is not having it. The American lands a pair of good shots. Maia decides to shoot in again and almost gets the takedown but Covington just won’t allow it. Maia is working for a single leg but he can’t get it. Maia rolls onto his back and invites Colby to the ground but Covington tells him to stand back up. Maia gets back up but looks tired. Both men are having trouble finding a home for their punches. Colby finds a home for back to back left hooks. He follows that up with an uppercut. Maia once again shoots in for a takedown but it is not there. Colby stuffs another shot and Maia looks exhausted. Both fighters connect with left hooks. Colby goes to the body with a punch and Maia responds with a kick. Colby is beginning to unload now. The horn sounds to end round two.

Round three begins and Covington immediately presses the action. He throws a right hand followed by a left hook. Maia circles off the cage. The Brazilian lands a nice uppercut. Good shots from both men in the clinch. Colby is getting the better shots in. Maia shoots for a takedown but it is not there. Colby is battering Maia now. He lands another right hand. Maia is bloodied up. Both men are actually. Maia with some uppercuts from the clinch. Covington breaks free and lands some good shots. He continues to pepper Maia here in round three. The Brazilian sneaks in a knee. Two minutes remain in the final round. Covington lands a low kick followed by a stiff jab. Maia replies with a jab of his own. Big shots now from Colby. Maia decides to shoot for a takedown. Colby denies the shot and presses him on the floor. Maia is told to stand back up and then just shoots in for another takedown. There is blood everywhere now. The octagon canvas is covered. More shots from Colby to end round three.