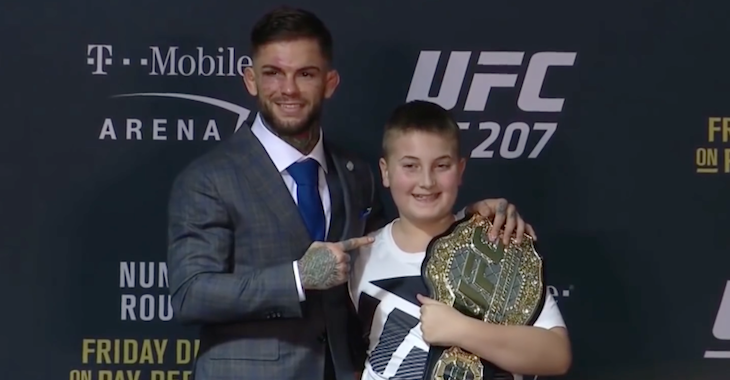 In one of the final UFC scraps of 2016, undefeated bantamweight fighter Cody Garbrandt put on the performance of a lifetime as he picked apart Dominick Cruz over the course of five rounds to secure the UFC bantamweight championship. In addition to picking Cruz apart, Garbrandt landed several big punches on Cruz that sent the champ to the canvas dazed and confused. Following the event, UFC commentator Joe Rogan took to social media to reflect on the moment, complete with a video of Garbrandt explaining how Maple has made such an impact on his life:

One of the best things to happen this weekend is what Cody Garbrandt did for a young man that he's friends with that has been battling leukemia. He brought his young friend Maddux Maple into the Octagon and handed him the belt after he won it. He said he was going to go out and buy a fake one for himself. It was one of the most beautiful things I've ever seen a guy do after winning the world title and it speaks volumes about what kind of a person @cody_nolove is. On top of that, he's a fucking hell of a fighter.

Leading up to the fight it was revealed that Garbrandt planned to give Maple the official UFC championship belt, while he planned to have a replica belt for himself.