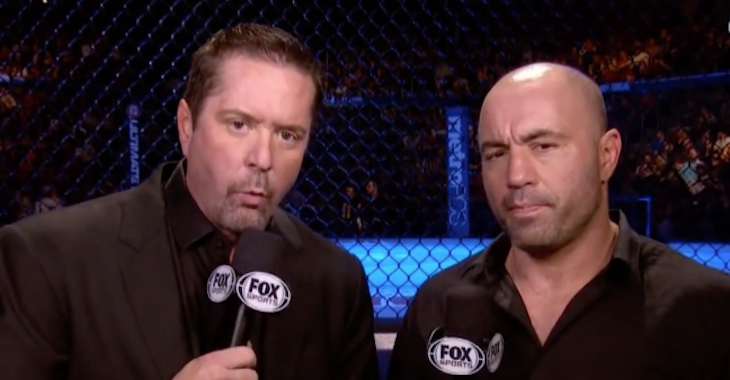 At the moment, it is not clear whether or not UFC 207 will go down as Ronda Rousey‘s last fight in the Octagon. Whether she chooses to fight again after her abrupt loss to Amanda Nunes remains to be seen. What we can be sure of, however, is that UFC 207 was the final work night of long time UFC commentator Mike Goldberg.

If you didn’t know that UFC 207 was Goldberg’s final night at the UFC commentary desk, that’s understandable. While MMA legend Urijah Faber received a heartfelt sendoff video moments before his final fight in the Octagon, which occurred at December’s UFC on Fox 22, Goldberg received no such honor. Granted, he’s no fighter. He’s never taped up his hands and stepped into the Octagon. He has, however, been a part of the organization for some twenty years, during which time his “IT IS ALL OVER,” and “everything else is virtually identical” Goldie-isms have become as synonymous with the UFC product as the Octagon itself.

Though it’s not exactly shocking, Goldberg’s family members aren’t particularly thrilled that his long time service to the organization wasn’t acknowledged during the UFC 207 broadcast. They took to Twitter to voice their concerns:

Sad that someone gives 20 years to the UFC & they can't even mention him leaving tonight. So disappointing & disrespectful. @MFG16 @ufc

Needless to say, the Goldberg’s aren’t thrilled with the quiet sendoff the family patriarch received.

Of course, Goldberg did receive some love from many members of the MMA community, from light heavyweight champ Daniel Cormier, to fighter turned analyst Brian Stann, to fellow commentator Jon Anik, to ranked lightweight Dustin Poirier, to legendary referee Big John McCarthy. So, it’s safe to say that while he was essentially snubbed by the UFC, he will be missed by the larger fight game.

We here at BJPenn.com, of course, wish Goldie all the best in the future. He’ll be missed!

Do you think Mike Goldberg’s departure from the UFC should have been handled differently? Sound off, PENN Nation!