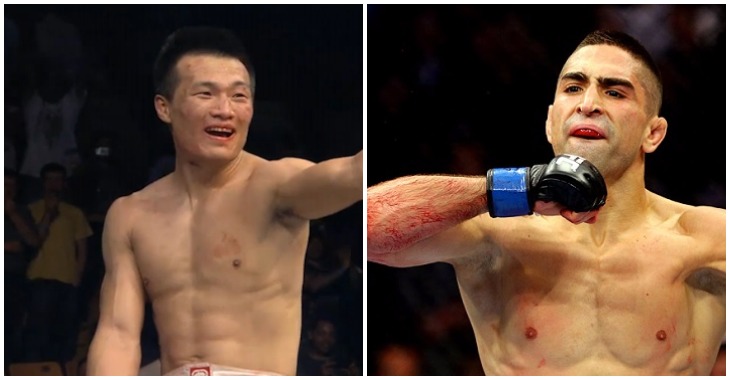 BJPENN.COM then acquired a response from Lamas, who assured that the fan favorite Zombie should be careful what he wishes for, and that he’d take the fight in the next few months, but that he wasn’t keen on waiting till late summer to get back in the Octagon.

“Be careful what you ask for,” Lamas said in response to the Korean Zombie’s callout. “He’s not gonna tell me when to fight him. If he wants this fight, then he can step up and fight me in May or June. I’m not waiting till august or September to fight again.”

On Monday morning, The Korean Zombie took to Twitter to double-down on his earlier callout of Lamas, referencing BJPENN.COM’s original report. In this Tweet, the Korean Zombie suggested that he and Lamas would probably get the main event spot if they were to fight in August, but that Lamas would probably be relegated to the undercard if he fought somebody else in the meantime.

Fight undercard with someone else or fight me in the main event in August. Your call. @RicardoLamasMMA @bjpenndotcom

Chris Taylor then confirmed with the undead star’s manager that his mention of BJPENN.COM in this Tweet was merely a reference to the aforementioned report – not a callout of Penn himself.

I can confirm that KZ was not calling out BJ with this tweet. Just referencing an article from @bjpenndotcom. He wants Lamas in August! #UFC https://t.co/FE7wwYlyjH

When we last saw the Korean Zombie in action, he returned from a lengthy hiatus to score an epic, first-round knockout of Dennis Bermudez in his comeback fight. His most recent fight before this defeat of Bermudez occurred all the way back in 2013, when he came up short in a title fight with Jose Aldo.

Lamas, meanwhile, is riding high on a submission win over Charles Oliveira. In his next most recent bout, he gave up a decision to interim featherweight champ Max Holloway.

Who do you think would come out on top in a Korean Zombie vs. Ricardo Lamas fight? Sound off, PENN Nation!