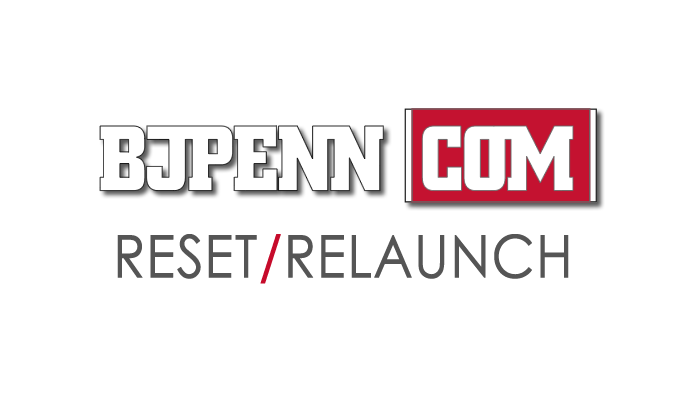 The NEW BJPENN.COM website has officially been LAUNCHED! We are happy to announce the RESET/RELAUNCH of your favorite independently owned Mixed Martial Arts news website, which contains a plethora of exciting new features.

Over the years we have been relentlessly at work to provide you with the latest scoop including unique, exclusive and breaking news in the MMA industry.

We would like to take this opportunity to bring you up to speed on all of the exciting new features that we are currently rolling out for you.

We have updated the website to allow for easier navigation and discovery of all the features that BJPENN.COM has to offer. Easily find exclusive interviews, past radio shows, and even brush on on your technique with Mixed Martial Arts tutorials. Learn proper technique from world champions and other highly decorated practitioners.

Stay on the lookout for the new “BJJ with BJ” series, where you will receive proper Brazilian Jiu Jitsu technique and instruction from me 🙂 As you likely already know, BJPENN.COM has made a lot of changes over the past few years which includes a new staff of writers, radio shows, breaking MMA news and exclusive content. While we have continued to grow and evolve as a website, our goal of providing the MMA fans with the all the latest in Mixed Martial Arts news has remained the same.

In 2017 BJPENN.com was responsible for breaking some of mixed martial arts biggest fights including:

Just two months into the 2018 calendar year and BJPENN.com has already broken several big fights including:

In addition to breaking some of MMA’s biggest news, BJPENN.com is also the home for exclusive fighter interviews.

Thank you for making BJPENN.com your preferred source for everything Mixed Martial Arts related and we hope that you enjoy the new website. I am so proud of what this site has become today.This is only the beginning… ONWARD and UPWARD!!

Much love to all of you for all of your amazing support over the years.