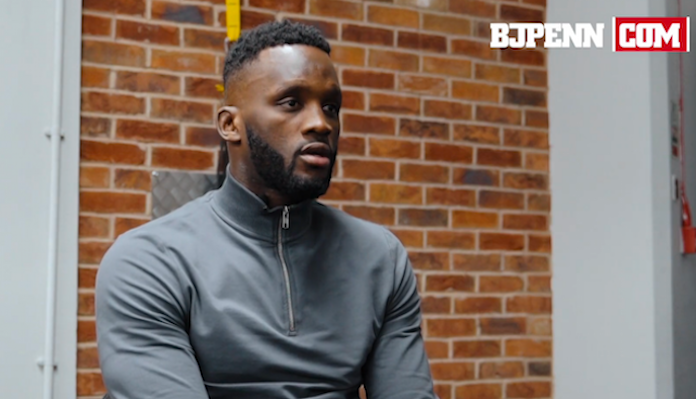 The middleweight prospect is the younger brother of UFC welterweight, Leon Edwards He is currently undefeated, having joined the promotional company earlier this year to take on Lee Chadwick. “The Assassin” secured a unanimous decision win, and later went on to beat Falco Neto and Jonathan Bosuku.

His opponent, Mike Shipman is known for his KO first-round finishing power. Despite coming off a loss against Costello Van Steenis at Bellator 223, the London fighter trains is one of the top middleweights on the Bellator roster. He also trains out of London Shootfighters gym, the stomping ground of headline fighter Michael “Venom” Page.

The middleweights have had a long-standing rivalry ever since Fabian Edward’s teammate, Yannick Bahati lost to Mike Shipman in a Bamma bout in 2017.

Their Bellator London showdown gave both English fighters the opportunity to hash out their differences in the cage.

As the fight began, Shipman seemed more hesitant than usual to fire off with punches. That strategy would follow suit throughout the rest of the fight as Seabass made a concerted distance to continually close the distance and pressure Edwards with takedowns.

His successful takedown attempts paid dividends in the second round as he was able to stifle Edwards. Although Fabian retaliated with guillotine attempts and showcased his ability to scramble out of some potentially dangerous positions.

Fabian appeared to be the more efficient and accurate striker. However the constant grappling pressure of Shipman was enough to nullify many of Edward’s trademark fighting moves.

Going into round three, Edwards was able to stalk Shipman down with strikes and take him down to the mat in the final seconds. Whilst he wasn’t able to execute the finish, it was a powerful finishing statement for the Birmingham fighter.

Seabass was able to impede the offence of Fabian Edwards for the first time in the undefeated opponent’s career. The Assassin ended up taking home victory by a shock split decision. The controversial decision reverberated through the area as fans were divided and multiple crowd fights broke out.

'Twas an utterly frustrating performance from Fabian Edwards (9-0), but not one to diminish faith in him as a blue-chipper. What he lacks in urgency, he compensates with stellar defense, smart striking and clinch dexterity – all reminiscent of older brother Leon. #BellatorLondon pic.twitter.com/FPdAuZsM0k

How did you score tonight’s Fabian Edwards vs Mike Shipman fight? Sound off in the comments section PENN Nation!