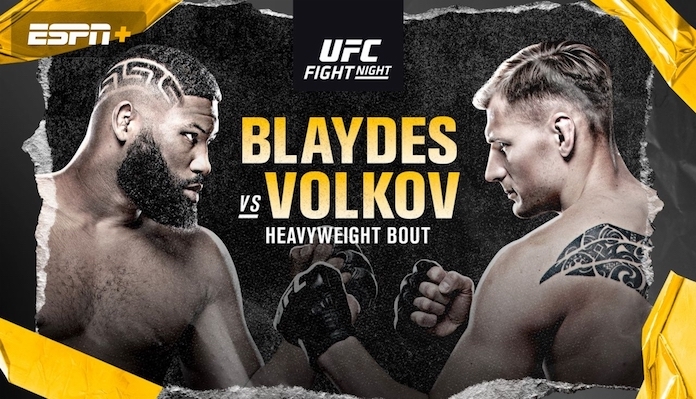 The Octagon remains in Las Vegas for UFC on ESPN 11, a twelve-bout fight card headlined by a heavyweight scrap between Curtis Blaydes and Alexander Volkov.

Blaydes (13-2 MMA) will enter tonight’s contest on a three-fight win streak, his latest being a second-round TKO victory over former champion Junior dos Santos. ‘Razor’ has gone 8-2 thus far in his UFC career, with his lone two losses coming at the hands of Francis Ngannou.

Meanwhile, Alexander Volkov (31-7 MMA) was last seen in action at November’s UFC event in Moscow, where he scored a unanimous decision victory over Greg Hardy. The former Bellator heavyweight champion has gone 5-1 since joining the UFC ranks in November of 2016.

The co-main event of UFC on ESPN 11 will feature a key featherweight battle between surging division contenders Josh Emmett and Shane Burgos.

Emmett (15-2 MMA) will enter tonight’s contest on a two-fight win streak, this after scoring stoppage victories over Michael Johnson and Mirsad Bektic in his most recent Octagon appearances.

As for Shane Burgos (13-1 MMA), the ‘Hurricane’ will enter tonight’s event sporting a three-fight win streak, his latest being a third-round TKO victory over Makwan Amirkhani at UFC 244 this past November.

Get all of tonight’s UFC on ESPN 11: ‘Blaydes vs Volkov’ Live Results and Highlights below:

Experience on display! 🙌 @JimMiller_155 with the 1️⃣st round submission.

🇨🇦 CANADA STAND UP!@PowerBarriault makes it back-to-back finishes for fighters from up north.

Cortney Casey vs. Gillian Robertson –  Robertson def. Casey via submission (RNC) at 4:36 of Round 3

Ground game on point! 🤼‍♀️@Savage_UFC puts the finishing touch on a dominant performance.

Frank Camacho vs. Justin Jaynes – Jaynes def. Camacho via TKO at :41 of Round 1

WHAT A DEBUT!!! 😱@JustinJaynesMMA wastes no time at #UFCVegas3. pic.twitter.com/Hlk10FLw5Z

Austin Hubbard vs. Max Rohskopf –  Hubbard def. Rohskopf via TKO (retirement) at 5:00 of Round 2

Who are you picking to win tonight’s UFC on ESPN 11 fights? Share your thoughts in the comments section PENN Nation!