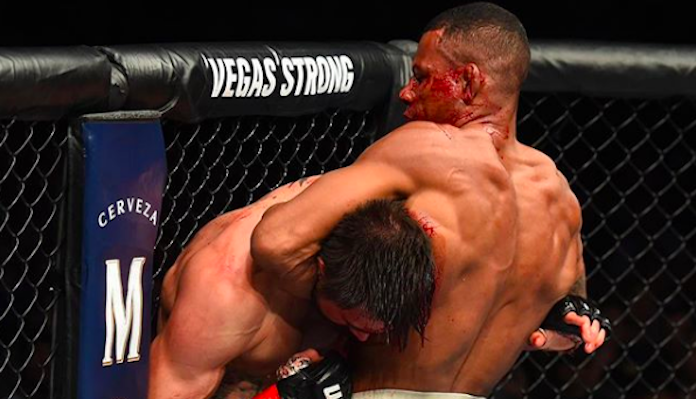 Over the weekend, in the co-main event of the UFC’s return to Glendale, Arizona, former UFC interim welterweight champ Carlos Condit returned to the cage opposite Brazil’s Alex “Cowboy” Oliveira. Cowboy took the fight on just a few weeks’ notice, stepping in to replace the injured Matt Brown.

Despite the brevity of his training camp, Cowboy ultimately came out on top in this fight, surviving a few scares to submit Condit with a guillotine choke in the second round. Yet the fight-ending submission did not come easy, as Oliveira had to keep the pressure on for what seemed like eons before Condit finally tapped.

According to Oliveira, Condit actually went to sleep before he tapped. Regrettably, the referee didn’t catch the former interim champion’s quick nap, so the battle roared on. Shortly after Condit passed out, Oliveira adjusted his grip, at which point Condit regained his consciousness and tapped out, ending the fight for good.

The Brazilian explained how it went down at the UFC Glendale post-fight press conference.

“Yeah, he went to sleep, and I changed grips on him, and he woke up, and I had to finish it, so I went and tightened it again,” Oliveira told the media post-fight (transcribed by MMAMania). “And then he tapped.”

Though Alex Oliveira lost his next most recent bout, succumbing to third-round Yancy Medeiros punches in a 2018 Fight of the Year contender, he has quietly carved out a respectable 8-3 record in the Octagon. In that time, he’s defeated fighters like Will Brooks, Tim Means, Ryan LaFlare, and Condit, with his only losses coming against top-flight foes in Gilbert Burns, Donald “Cowboy” Cerrone and Medeiros. He’s 19-4-1 overall.

Are you surprised to hear that Carlos Condit went to sleep before tapping out in Glendale?