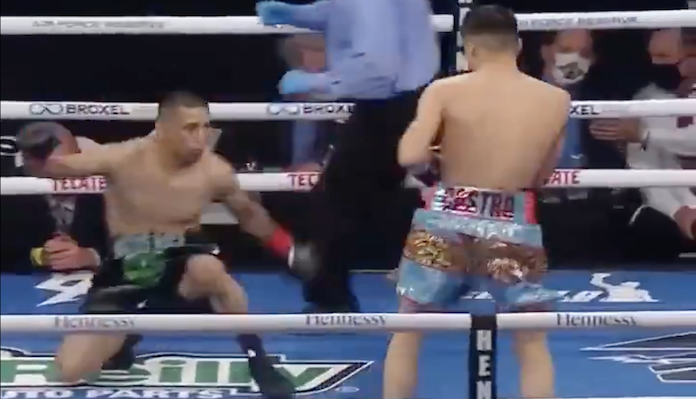 Moraga, a former UFC fighter, took on Castro in a short-notice boxing match on the undercard of the Alvarez card. Moraga fared poorly in the fight right from the opening bell, as he was dropped by a jab just seven seconds into the fight. Although Moraga managed to get back to his feet, he was dropped two more times in the second round, and eventually, the referee was forced to stop the fight. The loss to Castro dropped Moraga’s professional boxing record to just 1-3. Check out highlights from the bout (via DAZN).

Moraga made his mixed martial arts debut in 2009 and racked up an 11-1 record on the regional scene before getting noticed by the UFC matchmaker following the creation of the flyweight division in 2011. Moraga made his promotional debut against Ulysses Gomez and knocked him out in a devastating fashion. He then submitted Chris Cariaso in his next fight in order to earn a title shot against UFC flyweight champion Demetrious Johnson. Although Moraga proved thought to finish in that fight, Johnson was eventually able to put him away with an armbar in the third round. Moraga would fight for the UFC until 2018.

It’s hard to say what will be next for Moraga following this knockout defeat. It’s possible that he will still want to take another fight in the boxing ring, but with a 1-3 record as a pro boxer, maybe this isn’t Moraga’s calling. It’s also possible that he could make a return to mixed martial arts at some point, though at age 36 the end could be near for him now.

Do you think John Moraga will retire from boxing following such a brutal TKO loss?