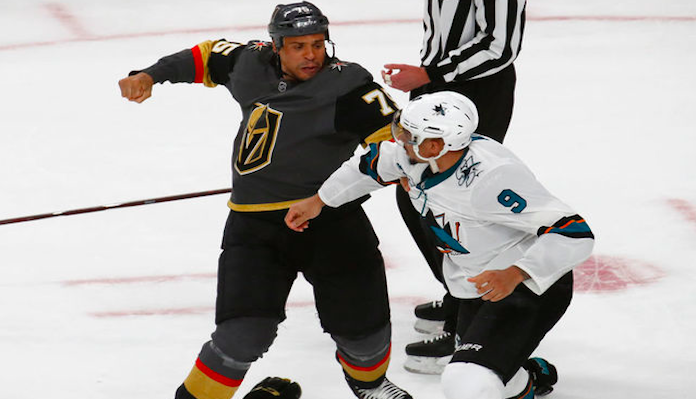 NHL enforcer Ryan Reaves of the Las Vegas Golden Knights has become the latest athlete to call out YouTuber Jake Paul for a boxing match.

This past Saturday night, Paul brutally knocked out former NBA player Nate Robinson in the co-main event of the Mike Tyson vs. Roy Jones Jr. boxing card. Since then, athletes from other sports have taken to social media to call Paul out. One of those sports is hockey, as San Jose Sharks power forward Evander Kane called out Paul on Sunday. Kane is a solid hockey player and a pretty good fighter, but he wouldn’t be confused with a heavyweight such as Reaves, the latest NHLer to say he wants Paul.

Taking to social media the day after Paul slept Robinson in boxing, Reaves took to his Twitter to say that he is interested in fighting Paul, telling him to “get that smoke.”

Right after I take care of @BizNasty2point0 at @roughnrowdy, @jakepaul can get that smoke. Book it!!

Right after I take care of @BizNasty2point0 at @roughnrowdy, @jakepaul can get that smoke. Book it!!

Reaves is considered one of the top enforcers and checking-line wingers in the NHL today. Standing 6’2″ and weighing in at 225lbs, the 33-year-old Canadian Reaves is a true heavyweight on the hockey rink. He is one of the top fighters in the NHL as well and has been involved in numerous fights over the course of his professional hockey career, which began back in 2010. Reaves has played in the NHL for the last decade.

While a member of the St. Louis Blues from 2010 to 2017, Reaves racked up a whopping 56 fights. He also had six fights while playing for the Pittsburgh Penguins in 2018 and he’s had six more fights while playing for the Golden Knights since then. Reaves would be a bit taller and heavier than Paul, but if the YouTuber really wants to test himself against someone who is bigger and stronger, Reaves is an option.

Would you like to watch Ryan Reaves vs. Jake Paul?