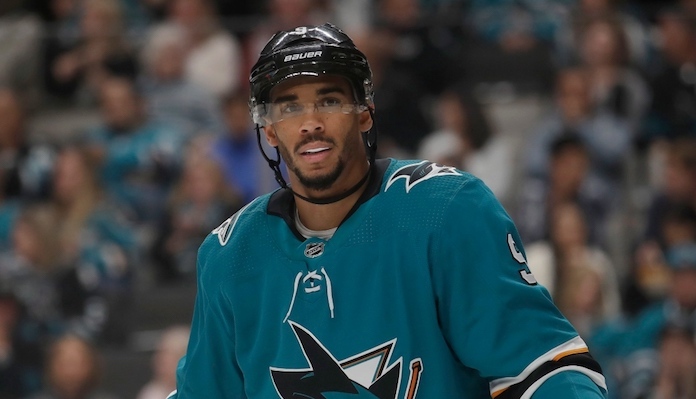 NHL star Evander Kane called out YouTuber Jake Paul for a boxing match in August 2021 after he knocked out Nate Robinson on Saturday night.

Kane is one of the top power forwards in the NHL today. The 29-year-old Canadian is a member of the San Jose Sharks and previously laced up his skates for the Buffalo Sabres and Winnipeg Jets/Atlanta Thrashers. He has placed in 713 regular-season NHL games in his career, scoring 242 goals and 215 assists for 457 total points. But even more striking than his scoring numbers are his gaudy penalty minutes totals.

Since entering the NHL during the 2009-2010 season, Kane has racked up 946 penalty minutes. He has fought 21 times during the regular season, including seven fights as a member of the San Jose Sharks over the last four seasons. Kane also has an additional fight in the postseason and two fights in the preseason.

On Saturday, Paul took on Robinson in a boxing match and completely smoked him in a one-sided beating. Following the fight, Kane took to Twitter and challenged Paul to a boxing match next summer when the upcoming NHL season is over. The 6’2″, 210lbs hockey player also criticized Paul for fighting a smaller opponent in Robinson.

yo @jakepaul I’d wreck ya. Easy to beat up guys with no experience and much smaller. August 31st 2021 Vegas we can see if you really about that action. #YOURMOVE

yo @jakepaul I’d wreck ya. Easy to beat up guys with no experience and much smaller. August 31st 2021 Vegas we can see if you really about that action. #YOURMOVE

Check out a great hockey fight between Kane and Ryan Reaves of the Las Vegas Golden Knights (via HockeyFights).

With Kane weighing in at 210lbs and Paul weighing at 189lbs, there seems to be the potential these two could meet somewhere in the middle and fight. Kane has no boxing fights, but he has plenty of NHL fights. Paul is chasing big-money fights, saying he could be the next Floyd Mayweather, and opponents such as Conor McGregor have been mentioned. But Kane seems like a much more realistic target.

Would you watch Evander Kane vs. Jake Paul?