Jake Paul is set to headline Madison Square Garden next month on Showtime pay-per-view. While the 25-year-old was originally set to face Tommy Fury, the Brit was forced out due to visa issues. However, ‘TNT’ has now been replaced by ‘Gold Blooded’.

‘The Problem Child’ will meet Hasim Rahman Jr. next month in New York. Ahead of the matchup, many believe it is the YouTube star’s biggest test to date. Rahman Jr. is an established professional boxer, holding a 12-1 record. He also reportedly has upwards of one hundred amateur contests.

Furthermore, he’s a heavyweight. Meanwhile, Jake Paul has never fought above cruiserweight before and has only five pro fights. Despite everything against him, his brother still believes he will win.

Logan Paul previewed his brother’s fight with Hasim Rahman Jr. in an interview with FightHype. There, ‘The Maverick’ predicted that Jake would win by knockout. Logan pointed out how his brother has knocked out all of his foes as proof of his impending victory. 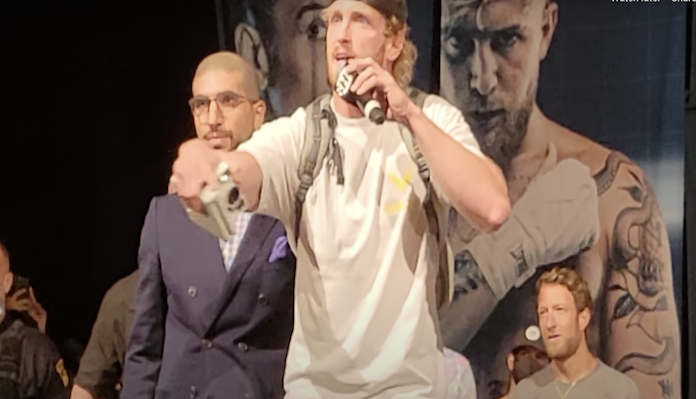 “I’m not nervous, I just believe in Jake so much. Whatever Jake says, he does. I have an unwavering faith in my brother. So, whatever he says I believe. I’m on his team no matter what, I do think it’s his hardest fight for sure…He’s navigated his boxing career incredibly intelligently. You know, he’s picked really specific, strategic opponents that should beat him. But every time, he comes out victorious.”

Logan Paul continued, “I think it’s going to be a knockout, just like the rest. Historically, everyone that Jake faces ends up the same way. Just horizontal, face down on the canvas. I don’t think this is going to be any different.”

Who do you think wins Jake Paul or Hasim Rahman Jr? Sound off in the comment section below!