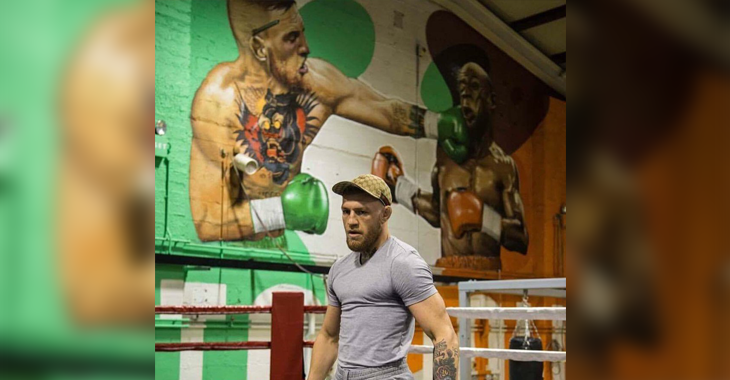 Whether you liked it or not, there is no denying that the big-money boxing match between Floyd Mayweather and Conor McGregor had people’s attention. The fight ended up being the second highest pay-per-view event in history falling right behind and quite close to the Floyd Mayweather vs. Manny Pacquiao fight.

The artwork of both Conor McGregor and Floyd Mayweather has gotten quite a bit of exposure as fans have had so much interest in both fighters. McGregor had a mural painted in his gym of him landing a punch on Mayweather’s face. Mayweather went a bit further and had two big portrait paintings of himself and McGregor installed in his house after the fight. Interestingly, it was revealed by MMA journalist Chamatkar Sandhu that similar to McGregor, Mayweather also had McGregor’s face in his gym. However, this work of art had a bit more practical use than McGregor’s gym mural.

While at the Mayweather Boxing Club this punching bag with Conor McGregor's face was just laying there amongst old, used equipment, most likely waiting to be thrown out. pic.twitter.com/qN7l67AQi9

While there was some talk of Mayweather speaking with Dana White about fighting in the UFC, Mayweather cleared things up and said that he could fight in the UFC if he wanted but has no real plans of doing so. However, White stated on Thursday that he has a meeting with Mayweather’s team later in the day and said that “anything is possible.”

Do you think we will see Floyd Mayweather fight again either in the boxing ring or the Octagon? Let’s debate this one in the comment section.