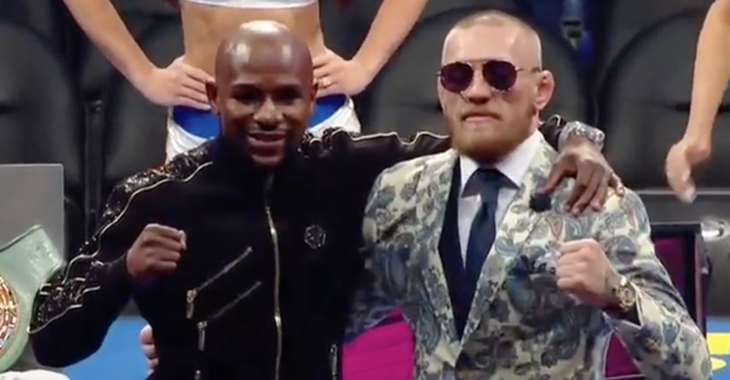 Floyd Mayweather’s blockbuster battle with UFC lightweight champion Conor McGregor is now soundly in the rear-view. That said, the boxer is still surrounding himself with mementos of his showdown with the Irishman.

On Monday night, the undefeated boxing star shared a photo to Twitter, which shows side-by-side paintings of himself and McGregor, hanging in his Beverly Hills mansion. See it below.

“Exclusive timeless artwork in my Beverly Hills home,” Mayweather said of these paintings.

Now that his boxing match with Mayweather is done, McGregor is expected to redirect his focus back to the UFC’s Octagon, where fights with stars like Nate Diaz, Tony Ferguson, Kevin Lee, Khabib Nurmagomedov, Max Holloway, Tyron Woodley, and perhaps even Georges St-Pierre await. He’s 21-3 as a pro mixed martial artist

What do you think of these impressive paintings hanging in the home of Floyd Mayweather? Are you surprised to see Conor McGregor on his wall? Join the conversation in the comments section!