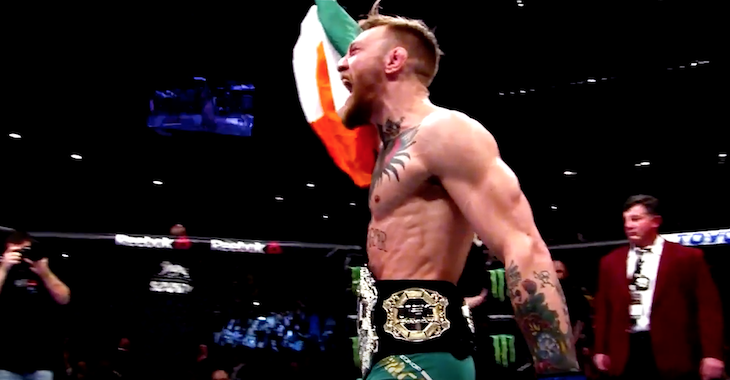 Dana White has been making the rounds today and everyone wants to know about Conor McGregor. Going into 2018, his future in the UFC is completely unclear. On a mission to clear that up, White put his foot down and said that if McGregor does return, he’ll be defending his title against Tony Ferguson. Title defense criticisms have been what man fans target, as well as Ferguson in his ‘defend or vacate’ campaign, but White recently has said those critiques are completely overblown.

“For people to suggest that [Conor McGregor be stripped of his UFC lightweight title], you’re just a Conor hater. Because if you look at how everything played out, Conor has fought everybody. When he won the 155-pound belt, he dropped the 145-pound belt, which we made him do. He tried not to do it, but he contractually had to let go of the 145-pound belt. He became the 155-pound champion, and his next fight was against Floyd Mayweather. He has to defend the title now. So, how has he never defended the title?”

“There’s some f-cking exaggeration in saying the guy’s never defended a title. He fought everybody on his way up 145 pounds. He fought [Chad] Mendes, [Dustin] Poirier. He beat Max Holloway, the only guy to beat Max Holloway in four years. It wasn’t Conor’s fault [Rafael dos Anjos] got hurt. It is Conor’s fault he did Mayweather, but we decided to do the Mayweather fight and everybody gave a f-ck. And after the fight, every fighter in the UFC gave him props for representing the sport.” — Dana White speaking to ESPN’s Brett Okamoto.

Who would have ever thought that the injured foot of Rafael dos Anjos would cause all of this chaos? Two welterweight fights with Nate Diaz, a lightweight title scrap with Eddie Alvarez, and the multi-million dollar boxing bout with Floyd Mayweather later, Conor McGregor is the biggest MMA superstar in history. That is something no one can deny, but this title defense argument haunts him. McGregor strutting back into the Octagon and successfully defending against Tony Ferguson would silence the only legitimate critique of his career and unify the titles. Dana White is hopeful this will go down by Summer next year.