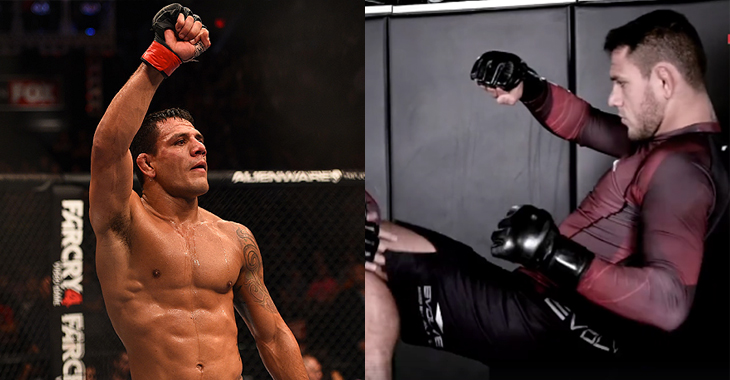 Throughout his career he has defeated some of the UFC’s biggest names. Between 2014 and 2015 alone, Dos Anjos beat Benson Henderson, Nate Diaz, Anthony Pettis and Donald Cerrone. That’s an impressive list of elite fighters.

Muay Thai, and ancient martial art developed by Thailand, is both brutal and beautiful in its artistry. The “Art of Eight Limbs” utilizes the human body’s most potent offensive weapons — the hands, the feet, the elbows, and the knees. With a solid Muay Thai game, fighters can go into battle with confidence.

Catch your opponent off guard with this devastating and powerful strike!https://evolve-vacation.com

Check out the video here

In this video that Evolve Vacation shares with us today, Dos Anjos shows us an interesting technique we can try. In the following clip, Dos Anjos executes a jumping switch knee.

Standing next to the 6-foot tall Brazilian jiu-jitsu world champion Bruno Pucci, Dos Anjos tells students to start off with some punching combinations first to get break through the opponent’s glove guard. Once some space is created in between, you can explode upwards to throw a switch knee.

“Throw it right down the middle,” Dos Anjos says, making the move seem easy. In reality however, it probably takes months of practice to get this move correctly. It’s an uncommon strike that you can use to stun foes who aren’t expecting it.